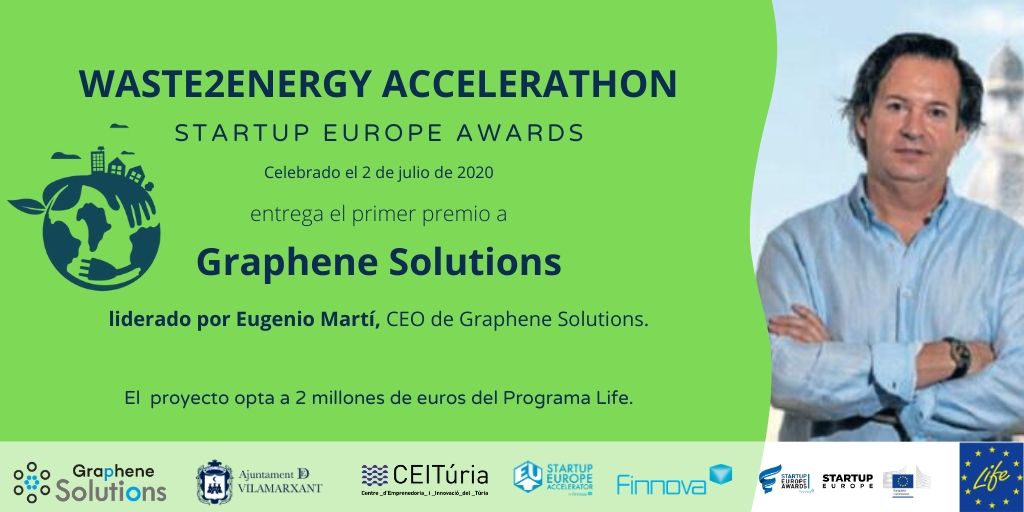 Finnova experts will help the winner write a project plan to submit it to the LIFE programme call, which will give the team the opportunity to be eligible for a grant of up to €2 million

The project “Methanol production from ELVs (end-of-life vehicles) waste in scrap-yards” conceived by Graphene Solutions, a company led by Eugenio Martí, has been declared winner of the Waste2Energy Startup Europe Accelerathon. The competition was organized by Finnova and boosted by the Municipality of Vilamarxant (Valencia), in connection with the Centre d’Emprenedoria i Innovació del Túria (CEI Túria).

“Thank you very much for launching this call, in which I believe many synergies will be created”, Eugenio Martí, member of the winning team, declared. Eugenio has been working hard on his challenge during the last week. His aim is to recycle ELVs waste (currently non-recyclable waste) into methanol to generate green energy and reduce pollution. “The innovative solutions suggested to use energy from waste are essential for the promotion of circular economy, since sustainable, environmentally responsible products are searched more and more every day”, Susana Solís, the Eurodeputy and member of the EU regional development commission, has claimed.

This Thursday, July 2, the final of the Waste2Energy Startup Europe Accelerathon was held online. A jury and the six finalist teams took part in it, accompanied by more than 2,000 people who were live on Facebook. Throughout the live streaming ceremony held on a webinar and on Facebook Live, each team presented its project during an elevator pitch and undertook a double assessment. On one hand, a jury formed by 16 experts from Panama, Brussels and Spain analysed the proposals of each team; their assessment signified the 80 % of the overall scoring. On the other hand, the votes of the audience, which were more than 1,000, corresponded to the remaining 20 %.

Below, you will find the participants in the opening event:

· Chris Hoornaert, Ambassador of the European Union in Panama.

· Susana Solís, Eurodeputy and member of the Committee on Regional Development at the European Parliament.

· Alfonso Young Hassan, Chargé d’Affaires in the embassy of Panama in Brussels.

After the jury’s verdict, the winning team obtained a European accelerator ticket awarded by the Startup Europe Accelerator. This ticket allows them to present the project, in July 14, to the Life programme of the DG ENVIRONMENT of the European Commission. In addition, the winners will be able to network in Brussels during the European Week of Regions and Cities, which will be held from October 12 to 15, 2020. Finally, the winning team will also take part in the Startup Europe Awards 2020 edition.

During the last week, the participants of the programme have worked in different multidisciplinary proposals concerning the Waste2Energy challenge. The goal was to recycle waste into energy. The teams have been mentored by the Finnova Foundation experts on European funds.

The Team 2: Methanol production from ELVs (end-of-life vehicles) waste in scrap-yards, explained that the problematic wastes are the foam and fabric of carpets, mats and seating furniture. Some of the packaging of fabrics is made of plastic, which makes it difficult to remove the plastic from them, since they are attached to it. It is also essential to consider the plastics used to make the fabrics; their composition is remarkably diverse depending on the manufacturer. Then, while the exterior plastics tend to be standardized, such as bumpers, the interior ones are not subject to any regulation. It is for this reason that the winners propose a plasma photocatalytic hydrogasification treatment. This technology has already been presented to a LIFE programme subsidized by the UE. The project consisted in building a pilot plant that produces a chemical compound to be mixed with the fuel called ECOMETHYLAL (2016-2020).

Thanks to these innovative projects boosted by Finnova Foundation together with the Municipality of Vilamarxant, in connection with the CEI Túria and held back by the DG CONNECT of the European Commission through the Startup Europe Awards, the winning project will be qualified for a grant of up to €2 million. The grant would make it possible to develop the innovative project during a period of 3-5 years. The aim is to start the transition towards a greener, low-carbon, circular economy in harmony with the Sustainable Development Goals of the 2030 Agenda of the United Nations.

From this Friday, July 3, to next Tuesday, July 14, the Finnova Foundation experts on European funds will mentor the winning team to write the project plan aiming to submit it to the LIFE programme 2020call for proposals, specifically to the Environment sub-programme. “Our goal is to enhance entrepreneurship, green employment, education of young people and to help absorb better European funds. This methodology has been proved to be a total success”, Finnova’s CEO Juan Manuel Revuelta has declared.

The programme counts on the institutional backup of the DG CONNECT of the European Commission and it is aimed at civil servants and political leaders of municipalities, companies and public corporations, employers’ associations, institutes of technology, universities, innovative enterprises holding patents, or corporations proposing environmental challenges which can be fought off from the financial and technological boost offered by the LIFE programme. Aiming to support the visibility and objectives of the 2030 Agenda, the Finnova Foundation initiative follows the directions of the SDG 9: Industry, Innovation and Infrastructure, declared the SDG of the month of July, and also the following ones: