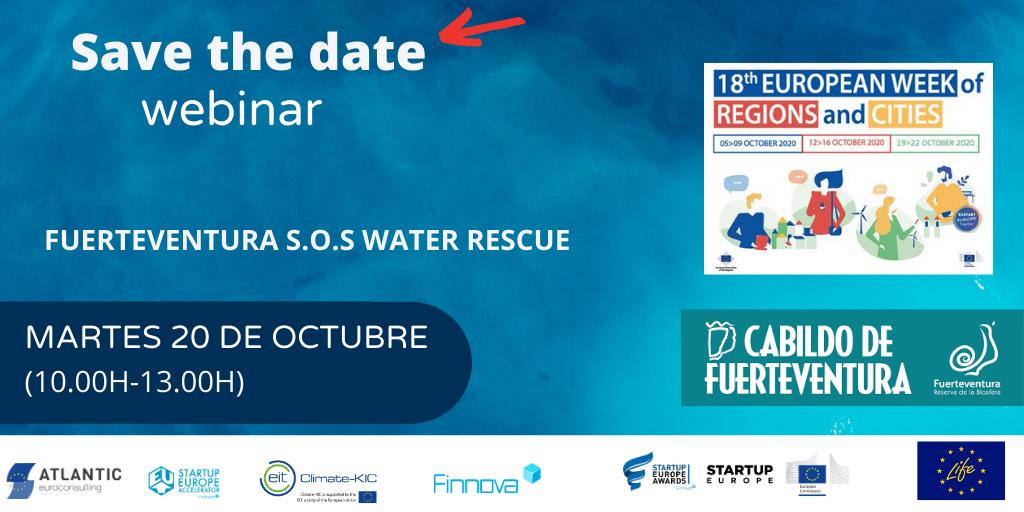 Brussels, 19.10.2020 – On 20th October 2020, the Finnova Foundation and the Fuerteventura City Council will present a unique event in the Canary Islands: “Fuerteventura SOS Water RESCUE”. The webinar will take place between 10:00 and 13:00 and is part of the European Commission’s Week of Regions and Cities.

In October 2019, the Fuerteventura Island City Council, through its Department of the Environment, The Fight against Climate Change, The Circular Economy and R+D+I directed by Marlene Figueroa, launched a strategic study aimed at defining the circular economy on the island, within the framework of the commitments of the United Nations Agenda 2030 for Sustainable Development Goals. The objective of this strategy was to diagnose and plan the different actions that would be carried out in the short, medium and long term and that would be committed to this cause of a European and global magnitude: an economic system that would generate new green jobs, both public and private, together with a renewable energy policy that would guarantee an efficient use and management of our environment, our resources and our waste.

Access to quality water is essential for health and human development. On the island of Fuerteventura almost all of the water consumed comes from desalination plants. Of this amount, more than 50% of the liquid is lost when it leaves the plants, which has a significant impact on the environment, energy and economy. For this reason, the treatment of wastewater as well as the system for supplying drinking water must play a fundamental role in mitigating climate change and in optimal human development. At the same time, improving waste management to achieve a fully circular economy remains another priority for the EU. All of the above is in line with SDGs 6, 7 and 13. Fuerteventura S.O.S Water Rescue aims to be an international showcase for the circular water economy.

Fuerteventura has been obtaining drinking water from seawater for over 40 years, using a unique method, water desalination stations. The Island City Council considers it necessary to implement new policies aimed at the circular economy, not only focusing on extraction, manufacture, use and disposal. It is necessary to close the cycle by reducing waste and/or extending its useful life.

European Week of Regions and Cities 2020

The European Week of Regions and Cities (#EURegionsWeek) is an event held in Brussels every year (this year from 12 to 15 October) that is mainly focused on regional policy. It is a communications and networking platform where regions and cities from all over Europe come together through different political representatives, officials, experts or academics.

This year the main themes will be: Green Europe; Cohesion and cooperation; Empowering citizens.

There is the option of organising parallel events in digital form related to the themes covered in #EURegionsWeek between 5 and 9 October, 12 and 16 October, or 19 to 22 October 2020

Accelerathon is a programme for accelerating innovative projects promoted by the Finnova Foundation. This methodology of the Finnova Foundation aims to find solutions and funding, through an applied open innovation online system that brings together the innovative ecosystem in the environmental sector, in which the European Commission works in the framework of the LIFE programme.

This will involve training, mentoring, jury work and very special prizes including the possibility of the winning project being eligible for validation under the LIFE programme: a project of up to ?2 million over three years

The Fuerteventura City Council is the governmental and administrative form, typical of the Canary Islands, which has two main functions. On the one hand, it provides services and exercises powers specific to the Autonomous Community and, on the other, it is the local body which governs the island. The Regional Ministry for the Environment, the Fight against Climate Change, The Circular Economy and R&D&I has launched a strategic study aimed at defining the circular economy on the island, within the framework of the United Nations Agenda 2030 for Sustainable Development Goals.

European Foundation for the financing of Innovation. Based in Brussels, Madrid, Catalonia, the Basque Country, Valencia, Andalusia and the Canary Islands, its objectives are to promote public-private cooperation through innovation to address social challenges such as employment, training, entrepreneurship, the United Nations’ ODS, water, waste, fire fighting, the circular economy, etc.