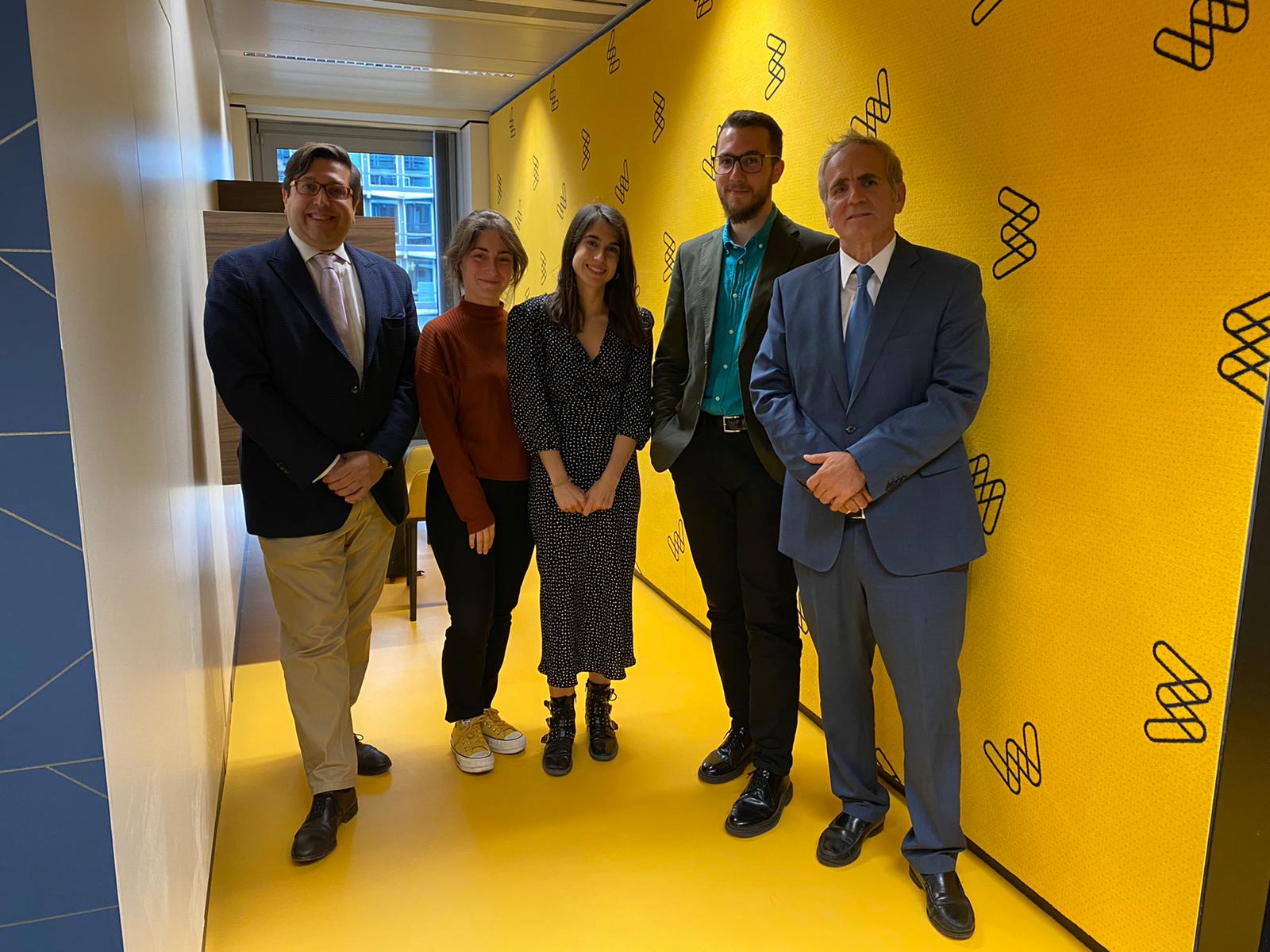 Brussels, July 15, 2020 – On the occasion of World Youth Skills Day, the Finnova Foundation reiterates its commitment to young people within the framework of SDG 4 of the United Nations 2030 Agenda on quality education, to ´guarantee inclusive, equitable and inclusive education quality and promote lifelong learning opportunities for all.’ Finnova, through its two priority lines of action – the education and training of young Spaniards and the improvement of their employability and the return of talent – promotes a culture of innovation and entrepreneurship, of vital importance for the access of young people to better jobs.

‘In recent years, youth unemployment rates in the European Union have risen to unprecedented levels due to the economic crisis or the coronavirus. This makes it more important to improve the employability of young people through programs such as international training practices’, explains Alberto Navarro, director of Training and Employment at the Finnova Foundation. ‘Traineeships are essential to facilitate the transition from the educational system to the world of work, but in many cases, they are carried out incorrectly, such as when they are not used to the maximum advantage. the capacities of young people’, he affirms.

Since 2016, Finnova has welcomed 220 fellows from Spain, but also from other countries in Europe and Latin America at its headquarters in Brussels to improve their training in European affairs, innovation and entrepreneurship from the different areas of the foundation such as those of EU projects, European law and consumer protection, communication and marketing, administration and finance, among others.

‘From the Finnova Foundation, we are committed to young people and their training, that is why we design training programs tailored to each one, attending from the first moment to their interests and motivations and monitoring the day-to-day development of the rooms to detect any problem that may arise and solve it immediately. In addition, we especially take into account the “day after” the scholarship ends, preparing, for example, the candidates to carry out the internships in one of the European institutions such as the Parliament or the Commission’ says Alberto Navarro.

‘It was a great experience’ says Adrián Noheda, a former fellow of the Dipu te Eurobeca in Finnova and, currently, director of the SMEs Innovation Area of ​​the Finnova Foundation in Valencia. ‘It opened many doors for me by allowing me to have an experience in an international environment and by being in contact with European organizations; gave me a close look at how Europe works; in addition, working with European projects offers many opportunities’ he adds.

In addition, more than 200 young people have enjoyed a high-performance stay for a period of between five and seven months in Brussels thanks to the Talentium Jaén mobility program, the Dipu te Eurobeca, the Hebe Plan: Eurobecas, the Badajoz Europe Scholarships , Fuerteventura Europa and Genius de Tarragona that has been managed by the Finnova Foundation. The participants of these mobility programs have also had the continuous support of the Finnova team in Brussels through an individual mentoring program to develop their projects according to their professional interests.

The young beneficiaries of these programs have carried out training stays in organizations such as Microsoft, the Departments of Employment, Education and Culture of the Embassy of Spain, KIC Innoenergy, the Embassy of Panama, CEOE, UNED, Eureka Network, Water Europe , the European Business Angels Network (EBAN), the European Center for Political and Social Studies (CEPS), Turespaña, the European Regions Research and Innovation Network (ERRIN), the Spanish Chamber, the European Schools or the EFE Agency, among many others.

From Brussels, Juanma Revuelta, CEO of the Foundation and the Erasmus Prize of the EU, encourages young Spaniards to take advantage of the training opportunities offered by the European Union. As an example, one of the programs he recommends is the PICE Mobility grant from the European Social Fund, coordinated by the Spanish Chamber and offered through some Chambers of Commerce. These scholarships provide young people with the opportunity to do internships abroad for a period of 3 to 6 months.

The Finnova Foundation participates as a host entity in different European programs so that young people from any country can enjoy training stays in the offices of the European neighbourhood of Brussels, the city of Seville or Valencia. Its learning by doing methodology allows young people to learn on-site and through daily work, which is combined with parallel training in financing and European programs. The objective of the Foundation is to contribute to the development of capacities in the management of European funds. In fact, Finnova recently has the educational gamification platform that it has developed in close collaboration with Play & go experience. It is a virtual space that has a complete course on the LIFE program of the European Commission, thanks to which participants can learn to write a proposal successfully.

Some European programs, such as the Assembly of the Regions of Europe Eurodyssey or the European Social Fund PICE Mobility scholarships managed by the Chambers of Commerce, have open calls at the moment and there are published internship offers to start in the summer months.

More information about the mobility programs managed by Finnova

In recent years, the Finnova Foundation has supported different public entities such as Provincial Councils, Councils and City Councils in creating their own mobility programs. These are some of the most relevant examples:

The Dipu te Eurobeca is a program promoted by the Diputación de València with the support of the Finnova Foundation to carry out internships in organizations and companies in Brussels, the community capital, which also offers mentoring, assistance for uninterrupted emergencies, informative alerts with opportunities, events of interest and training actions (seminars, round tables, fairs and meetings) in relevant areas such as European projects, EU communication, environment and energy, entrepreneurship and employment, among others. He has been recognized with the Seal of Excellence of the Interns Go Pro organization and highlighted as one of the best eight scholarships in Europe by Le Figaro newspaper, ahead of institutions such as the British Council.

A total of 25 young people from Jaen in the first edition and 37 in the second, have carried out work practices in companies and entities, both public and private, based in Brussels through the Talentium scholarships that have been convened by the Jaén Provincial Council with the support of Finnova and that are aimed at facilitating the insertion and job training of young university graduates, graduates or Higher Level Vocational Training in unemployment. This initiative, which is part of the Diputación’s Employment Plan, means providing young people with one more resource when it comes to finding and developing a job upon their return to the province of Jaén. It should be noted that the Talentium Jaén program has been awarded by the Andalusian Government in Brussels for its work promoting young employment.

The Huelva Provincial Council has also supported itself since 2018 in Finnova to launch the HEBE PLAN: Eurobecas annually for the concession of 5 paid scholarships in Brussels that include a travel bag and health insurance. Young people from the province of Huelva, with a university degree and unemployed, have enjoyed six months of paid non-labor internships in Brussels granted through the Eurobeca program and convened by the Local Development Area of ​​the Huelva Provincial Council, as one more commitment to the provincial institution for the training and employment of the youth of the province.

The Badajoz Provincial Council, with the support of the Finnova Foundation, has also launched the first call for the EUROPEAN SCHOLARSHIPS, thanks to which a total of 16 young people from the province of La Paz have benefited from a professional stay in the heart of Europe with scholarships from the Badajoz County Council. Specifically, in this first edition, scholarships have been awarded to 16 young people for five months of professional stay. The beneficiaries also have a university degree or a bachelor’s degree, with a high level of knowledge in foreign languages.

One of the young beneficiaries of this first edition was Carlos Periáñez Fit, who developed his practices at the Delegation of the Spanish Chamber of Commerce to the European Union just a few months ago and who is currently doing his practices in Finnova through the PICE Mobility grant. ‘It has been crucial for me to have had the opportunity to open my professional path thanks to both the EUROPEAN SCHOLARSHIPS of the Provincial Council of La Paz and the PICE Scholarships offered by the chambers of commerce. I am grateful to be able to enjoy this prolonged professional stay, since it has allowed me to be closer to the European institutions and to learn the basic fundamentals of marketing’ he says.

The Tarragona Provincial Council has promoted, with the support of Finnova, a new program to promote the employment of unemployed people in Camp de Tarragona, the Ebro Lands and Baix Penedès. A total of 15 people, under 35, with higher education and unemployed will benefit from the Genius Program, an initiative that offers training practices abroad for 5 months in entities and institutions of the European Union and a sixth additional month in a local entity of the demarcation. The Genius Program aims to train unemployed people in strategic sectors of interest to the demarcation of Tarragona. Training practices are carried out in Brussels from September 2020 to become professional in areas such as tourism, energy efficiency, sustainability, information management, projects and cooperation networks in the European Union.

The Fuerteventura Council, for its part, has been the first public entity to offer the specific training program in European projects for young people in its region: Fuerteventura Europe. They have launched a call through which three young people from Fuerteventura will enjoy a six-month training period in which prior training in European funds from their region will be combined with a four-month stay in the city of Brussels with the aim of ensuring that learn all the writing, participation and management tools in EU projects in order to raise funds in your community.

Finnova is the European Foundation for the financing of innovation. Its objectives are to promote private public cooperation through the technology transfer of low-cost solutions among the best technologies available to address social challenges such as employment, entrepreneurship, the United Nations SDGs, the circular economy, waste recovery, tourism sustainable or the fight against climate change. http://finnova.eu/