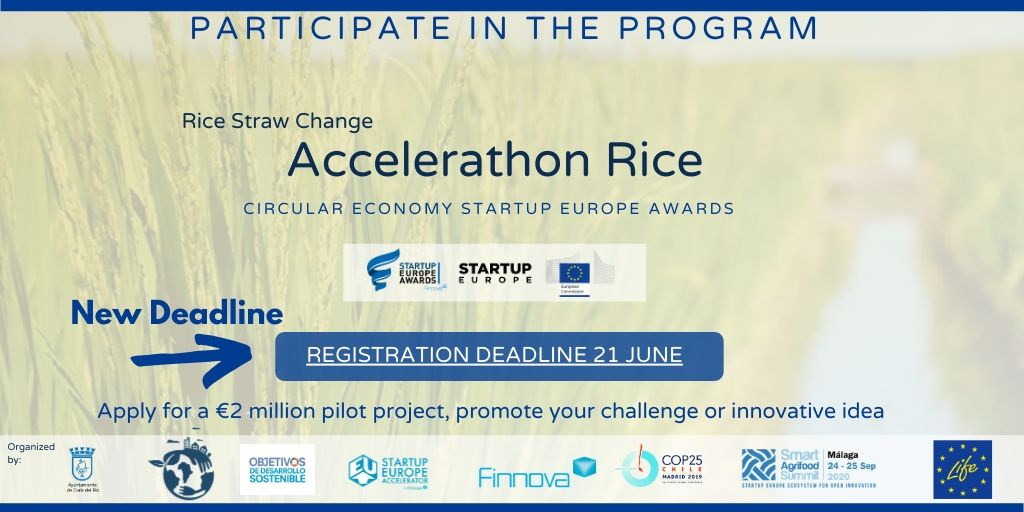 More than 20 experts have participated in in the opening session of the Rice Accelerathon that started last Tuesday, 16 of June at 17:00 (CEST). This is the first open innovation competition about circular economy on rice straw promoted by the Municipality of Coria del Río (Seville). Its main objective is to find innovative solutions that approeaches the treatment of rice by-products as a resource and not as a waste. This first briefing has brought together about 250 participants live from Spain, Portugal, Italy, Belgium, Ukraine, Mexico, the United States, the United Arab Emirates and Russia and. So far, it has reached more than 5,300 people on social networks with more than 2,200 deferred reproductions.

According to Modesto González, de Coria del Río: “This way we will be able to turn a problem into an opportunity for environmental and business improvements, and job creation. In addition, thanks to this initiative our locality remains at the forefront of the European Union’s projects related to the dissemination of sustainable activities, allowing us to generate more economy in our municipality.”

The winners of the Rice Accelerathon, organised by Startup Europe Accelerator of Finnova Foundation, will receive an acceleration ticket in order to access funding from the call for proposals of the European Commission’s LIFE 2020 programme. Around €2 million will be allocated per project. The winners will also be present and have visibility at the Smart Agrifood Summit to be held in Malaga on September 24 and 25. This is a leading event in the industry for the creation of innovative ecosystems within the European agri-food sector.

If you want to watch the opening session again, please click on the following link to access the video: https://youtu.be/exuFgU40DGk.

This programme counts with the institutional support of the European Commission DG CONNECT. It is addressed to officials and policy makers of municipalities, companies and public corporations, business associations, institutes of technology, universities, innovative companies with patents or corporations, with environmental challenges that can be solved with the financial and technological boost of the LIFE Programme.

All those who are interested in participating in the Accelerathon can now register filling the following form: https://bit.ly/3dcmZBz.

As an example, in 2019 more than 788,000 tons of rice, as well as rice straw and rice husk, were produced in Spain. When in contact with water, rice straw provokes a decrease of oxygen, rot and it can cause the death of birds and fishes. This is the reason why farmers burn rice straw, releasing greenhouse gas emissions.

Rice husk is also considered as waste that should be eliminated because if not, it tends to accumulate due to its low level of degradability. As a general rule, producers get rid of it thanks to a controlled combustion process that generates as a subproduct rice husk ash. These ashes represent a high percentage of silica that makes it apt for its use in sectors such as the cement industry.

Accelerathon is an acceleration programme for innovative projects fostered by Finnova Foundation. It is also a methodology designed by Finnova that consists of looking for solutions and funding through an applied, online open innovation system that binds together all the actors from the innovative ecosystem.

The Accelerathon also works under the methodology of the LIFE Programme of the European Commission. The challenge follows the SDG of the United Nations and brings support to other programmes related to the fight against COVID-19 and legionella, among others.

What is Startup Europe Awards?

What is Startup Europe Accelerator?

It consists of a European, second-level acceleration programme specialized in the support of incubation programmes linked to regional and national entrepreneurship. The aim is to help startups access EU resources in order to internationalise their project, and break into the market through European projects, mentoring, networking, lobbying, legal advice and international communication.

Coria del Río is a city 12 km away from Seville and strategically located besides the Guadalquivir river. This riverside town with thousands of years of history keeps under its streets the remains of important civilizations that settled here, such as Tartessos, Romans and Arabs, who turned Coria del Río into an ideal place for the promotion of culture, social development and economy through services such as livestock farming, agriculture and fishing. Over the years, the Corians had developed new techniques, and boosted riverside carpentry and sturgeon fishery, some things that made it the only place in Western Europe to have a caviar factory. It is also worth noting the close relationship that this town has had with Japan since 1614, when the Keicho Embassy led by the Samurai Hasekura Tsunenaga landed here and united both cultures. He left a legacy that more than 400 years later is still alive in more than 700 Corians who have inherited the surname “Japan” from that expedition. Nowadays, Coria del Río has more than 30,000 inhabitants and a tourist offer that makes thousands of visitors come to the town every year, attracted by its gastronomy, its rich landscape, its history, its festivities or its peculiar relationship with Japan.

Finnova is the European foundation for innovation funding. Its main goal is to promote the cooperation between public and private sectors through the best low-cost, technological solutions, in order to address social challenges such as employment, entrepreneurship, the SDG of the United Nations, circular economy, waste recovery, sustainable tourism, and the fight against climate change.