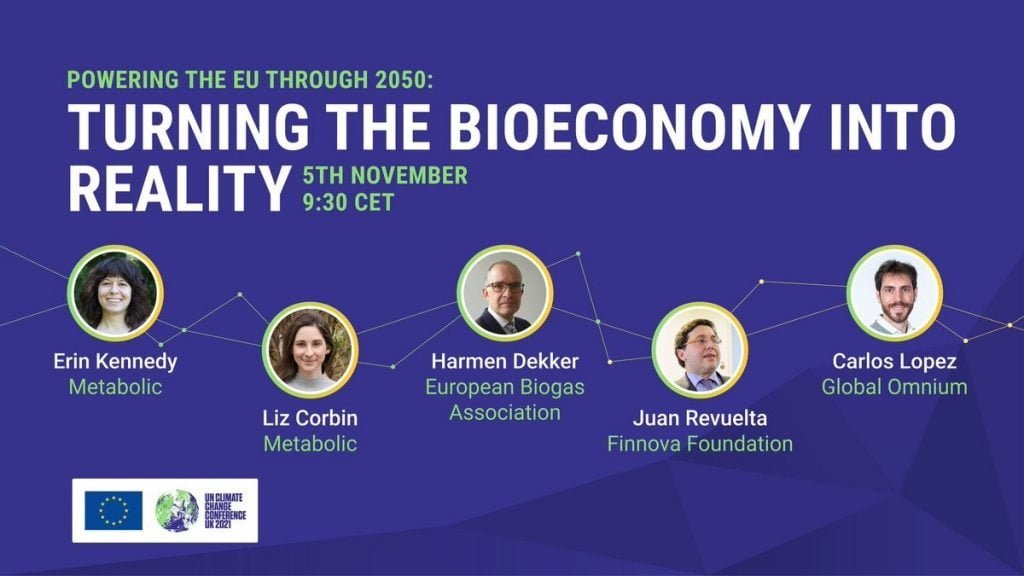 Finnova Foundation co-organised on 5 November an event entitled ‘Powering the EU through 2050: Turning the Bioeconomy into Reality’ along with Metabolic Institute and Global Omnium within the framework of EU side events at the 2021 UN Climate Change Conference (COP26). Throughout the panel discussion, experts debated about the current status of the bioeconomy in Europe and the challenges it faces to meet the EU’s endeavour to become climate neutral by 2050.

Created by the United Nations 30 years ago, the COP26 is the most important international forum devoted to addressing climate change. The 2021 edition will host on-site and online events from 31 October to 12 November in Glasgow and Brussels. Participants and policymakers will attempt to engage in new commitments to contain temperature rise to 1.5 degrees this century. This goal as well as those set out under the Paris Agreement will only be met provided that global emissions are halved by 2030 and net-zero emissions are achieved by 2050.

The event was moderated by Elizabeth Corbin, Metabolic Institute, who provided a broad overview of the status and impact of bioeconomy as well as the human actions and the consequences of them on the planet. Ms Corbin also made some forecasts vis-à-vis 2030. By that year, the EU is expected to reduce by 40% its GHG emissions, to increase by 32% the use of renewable energies, and to improve by 32.5% energy efficiency, which will enable to reach a green transition towards a sustainable future.

Challenges for the bioeconomy in Europe

Carlos Lafita, RDI manager at Global Omnium, Herman Dekker, chair of the European Biogas Association, and Juan Manuel Revuelta, CEO of Finnova Foundation weighed the challenges the EU faces bioeconomy wise. Equally, they brainstormed potential disruptive solutions to reach a green transition based on biogas and the exploitation of organic waste, among others.

All the speakers concurred that biogas is an available and sustainable solution capable of advancing the European green transition and bolstering the circular economy by harnessing agri-food waste instead of dumping them into landfills.

Juan Manuel Revuelta stressed the importance of EU funding for the 2021-2027 period. Mr Revuelta optimistically claimed that there are some EU schemes aimed at preserving the environment and advancing the circular economy, including Next Generation EU, LIFE, and Horizon Europe, a success story being the European project ‘LIFE ECOdigestion 2.0’. Mr Revuelta equally urged to harness organic – as well as textile and touristic – waste to avoid being disposed of in dumpsites, which may take a toll in our health and the environment. Instead, this waste may be re-used to contribute to the European economy.

Harmen Dekker said that biogas is one of the most viable and quick solutions to fulfil the green transition in Europe owing to it being a 100% renewable and zero-emissions source of energy. Mr Dekker did also reinforce the idea of using organic waste as an alternative to fossil fuels.

On the other hand, this event was held within the framework of the I Congreso Internacional de los Océanos – Reserva de la Biosfera El Hierro y Corredor Biológico Natural which took place from Wednesday 3 Nov. to Friday 5 Nov. 2021 in the Canarian island of El Hierro. Alpidio Armas González, the president of the Cabildo Insular de El Hierro (El Hierro regional government), wrapped up the event by pointing out at the El Hierro’s leading position, as 60% of its energy comes from renewable energies such as wind and hydroelectric power. The president said El Hierro could serve as a living lab and he welcomed any innovative project in energy to carry out pilot projects funded under LIFE and which may be eligible for scaling up under Next Generation EU recovery funds.

The event was wound up with the delivery of the Bioeconomy COP26 Startup Europe Awards, an open-innovation tool designed to identify emerging and promising enterprises capable of solving current challenges and fight climate change. These awards are implemented by Finnova Foundation and the European Commission’s DG CONNECT.

The winners of the 2021 edition were TheKSFactory, a company from Malaga belonging to Grupo RedVerde which specialises in researching raw materials to develop and create different natural compounds to produce consumer goods for the shipbuilding and architectural sectors. TheKSFactory focuses on recovering marine, green, and mineral waste which cannot be used and are sometimes hard to recycler or to dispose of.

This project, which is led by Global Omnium (Spain) and endorsed by Finnova Foundation (Belgium) and Águas do Centro Litoral (Portugal) seeks to become the most versatile digestion control tool due to its performance in achieving environmental and economic benefits thanks to the production of biogas from an optimal exploitation of waste. Thanks to this software, GHG emissions are reduced and the sludge emanating from wastewater treatment plants is harnessed.

The event was wound up with the delivery of the Bioeconomy COP26 Startup Europe Awards (SEUA) which acknowledge the potential of projects, start-ups, or disruptive ideas in bioeconomy.

The winners of the 2021 edition were TheKSFatory, a company from Malaga belonging to Grupo RedVerde which specialises in researching raw materials to develop and create different natural compounds to produce consumer goods for the shipbuilding and architectural sectors. TheKSFactory focuses on recovering marine, green, and mineral waste which cannot be used and are sometimes hard to recycler or to dispose of.

Created by the United Nations 30 years ago, the COP26 is the most important international forum devoted to addressing climate change. The 2021 edition will host on-site and online events from 31 October to 12 November in Glasgow and Brussels. Participants and policymakers will attempt to engage in new commitments to contain temperature rise to 1.5 degrees this century. This goal will only be met provided that global emissions are halved by 2030 and net-zero emissions are achieved by 2050.

Finnova Foundation is a Spanish-Belgian foundation which finances innovation. Finnova aims to promote public-private cooperation through innovation to address societal challenges such as jobs, training, entrepreneurship, the UN SDGs, and the circular economy, among others. Finnova works at an EU-level and is headquartered in Belgium, although it also has several offices across Spain.

Global Omnium is a highly renowned corporate group both in Spain and abroad. Global Omnium specialises in the different processes encompassing the whole water cycle, and it runs several complementary businesses which create synergies to optimise the use of water and to manage wastes. It services 5.5 million people in over 300 Spanish cities and it operates in three other continents. Global Omnium is a social-minded project, and it is made up of long-established companies which have been contributing to the growth of the cities and municipalities in which they operate.

The Metabolic Institute is a non-profit think tank working at the intersection of academic research and real-world experimentation. It is made up of experts who counsel governments, companies, and NGOs on how to adapt to a rapid changing world, while it equally creates disruptive solutions which can drastically change the functioning of economy. The Metabolic Institute analyses data, proposes strategies and tools, designs pilot projects, and creates new companies which develop scalable solutions to solve critical problems.

Startup Europe Awards is an initiative by DG CONNECT and has been implemented by Finnova Foundation since 2016. Startup Europe Awards are an open innovation mechanism aimed to identify disruptive start-ups and to promote private-public partnerships. They also seek to raise awareness on the importance of self-entrepreneurship as a driving force for job creation. In addition to promoting networks to meet the UN SDGs and the European Green Deal objectives, they also contribute to the circular economy, sustainable tourism, culture and creativity, and the fight against climate change.

LIFE ECOdigestion 2.0 features a software which enables to automatically control the pumping of organic wastes into anaerobic digesters in wastewater treatment plants (WWTPs) to maximise the production of on-demand biogas – a renewable source of energy. This project has a 970,000 euro budget and has a duration of four years (2020-2024). It is being led by Global Omnium Medioambiente (Spain) and is partnered by Finnovaregio (Belgium) and Águas do Centro Litoral (Portugal). The production of biogas to cover the energy demand and to reduce the amount of wastes in landfills complies with the provisions set forth under the EU’s Landfill Directive.