The seventh NEXT LATAM-EU GENERATION conference fulfils its aim of making cooperation, solidarity and innovation key tools for the prevention, reduction and management of disasters 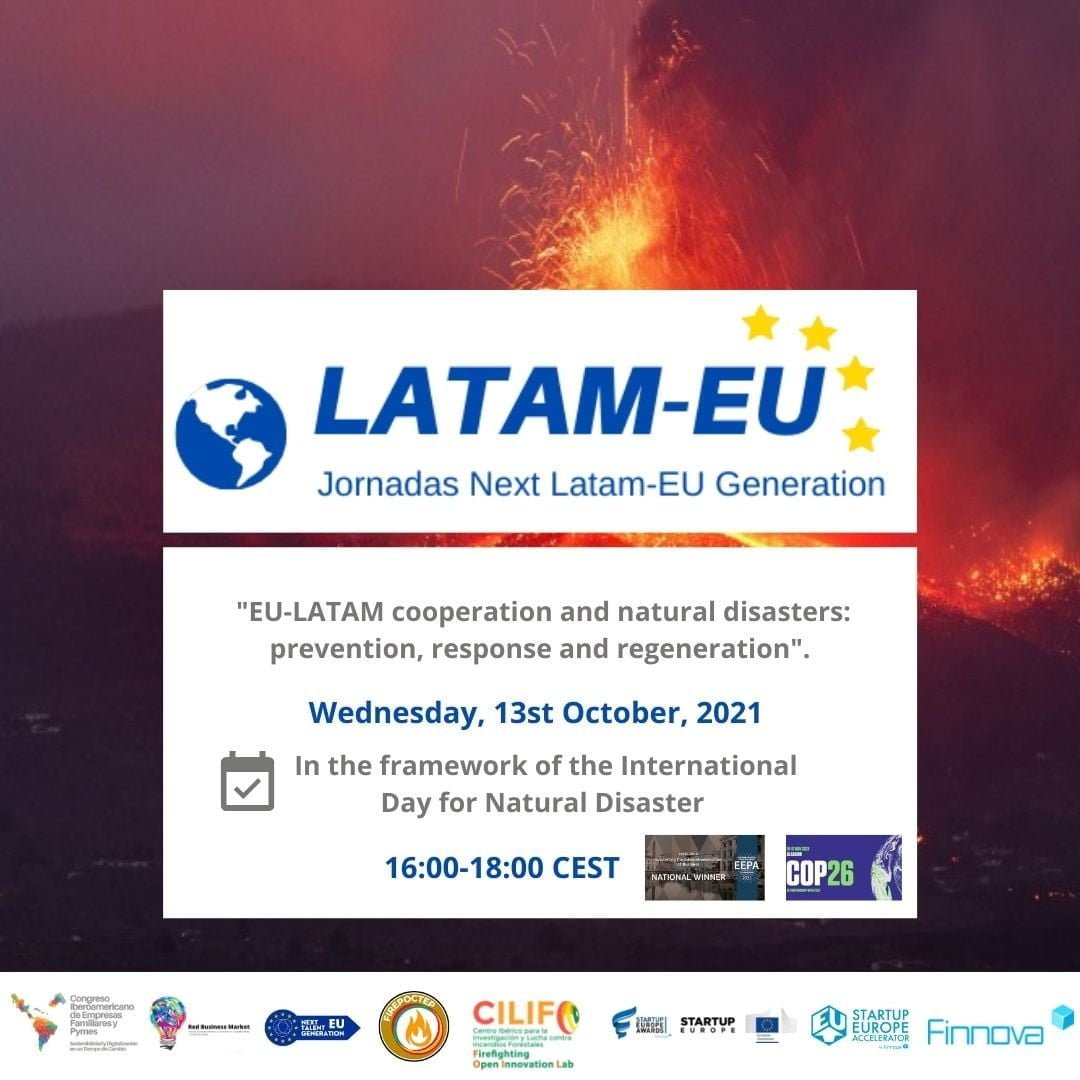 Brussels, 14.10.2021 – The seventh NEXT LATAM-EU GENERATION conference, entitled “EU-LATAM cooperation and natural disasters: prevention, combating and regeneration“, was held on the International Day for Disaster Risk Reduction and highlights the importance of cooperation, solidarity and innovation in order to reduce the impact of natural disasters produced by climate change. During the conference, the volcano tragedy of La Palma in the Canary Islands, the more than 510,000 deaths registered in the last 50 years due to natural disasters linked to climate change in Latin America, as well as the economic losses caused by earthquakes in Haiti and Chile and floods and droughts caused by El Niño phenomenon, were some of the disasters reminded during this event.

The aim of this initiative is to offer sustainable and innovative solutions to reduce natural disasters by linking EU Member States and Latin America. It also calls to develop joint projects benefiting from European funding in the wake of the La Palma volcano phenomenon, which is leaving its aftermath in the peripheral regions, which are more vulnerable and exposed to the impact of climate change. The conference featured speakers from 9 countries on both sides of the Atlantic, who highlighted the need to create management techniques and urgent

measures to help mitigate the impact of natural disasters. Each participant, from their own national contexts, explained how the integration of innovative projects in society can serve to manage and coordinate the main recurring disasters that they are likely to face due to the new climate reality. In the opening of the event, Juan Manuel Revuelta, Finnova CEO, insisted on the need for cooperation in the field of natural disasters, as well as their prevention and the benefits of the application of disruptive solutions for the recovery of affected areas, mentioning the volcano in La Palma as a current example.

The first block of presentations included Leda Sánchez Bettucci, president of the executive council of Ceresis: Regional Seismology Centre for South America, who gave an overview of the seismic panorama in Uruguay and highlighted the need to improve infrastructures and techniques to face a natural disaster, and José Luis Rojo Franco, head of productive development programmes and humanitarian focal point of the AECID technical cooperation office in Port-au-Prince, Haiti. José Luis pointed out the improvement made in the humanitarian response and local preparation in the August 2021 earthquake compared to the one in 2010 and emphasize the need for urgent action as well as local preparation and capacity to manage aid as key elements for an effective humanitarian response.

The event was followed by the participation of several experts in the field such as Nora Wolloch, executive manager of WSA; João Bosco Coura dos Reis, researcher associated with the MAP-Fire project; Barbarita Lara Martínez, leader of the S!E: Emergency Information System and Frederico de Moraes Rudorff, monitoring and alert coordinator, who presented various digital platforms that allow the management of risks and impacts of forest risks or floods and applications that allow sending text messages without Internet access or mobile networks in the event of a natural disaster, among others, from countries such as Chile, Brazil or Austria.

Juan Viesca, director of European funds at Finnova, presented the European Union’s cooperation programmes for financing projects in the field of disaster prevention and natural catastrophes such as floods, fires, earthquakes, storms and droughts.

From the institutional side, Christophe Pateron, deputy head of Unit, Emergency Management and RescEU of the European Commission, general management ECHO, presented the EU Civil Protection Mechanism which coordinates the European Union’s response in the field of natural and man-made disasters.

In the last block of the webinar, several entrepreneurs shared success stories linked to natural disasters. This part was attended by Alejandro Correa, head of the agricultural applications department at Drone Hopper, who presented the use of drones as tools for extinguishing fires; Leonardo Melgarejo, CEO of CivilSig, a Peruvian satellite that reports and warns of natural disasters and indicates the safe places in such cases; and Leonardo Rico, CEO of Lluvia Sólida, who mentionned the creation of a polymer that prevents the passage of fire on the ground to avoid putting the lives of firefighters at risk. Along the same lines, Héctor Juan, European projects technician at the Finnova Foundation, explained the FIREPOCTEP project, which aims to adapt to climate change through the prevention and management of the landscape exposed to forest fires in cross-border rural areas between Spain and Portugal.

To close with a flourish and give continuity to the cooperation and innovation of the NEXT LATAM-EU GENERATION conference, Juan Manuel Revuelta launched the 4 challenges of the COP26 Startup Europe Awards in 4 categories, whose prizes will be awarded at the corresponding official COP26 events, co-organised by Finnova during the month of November. The first event and challenge will take place on Friday 5 November in Brussels, having bioeconomy as main subject and exposing Life Ecodigestion 2.0 project as a success story. The second event and challenge will take place from La Palma, with representatives from LATAM and the United Kingdom in the circular economy, in particular, the textile and fashion sector, accompanied by a case of success such as the European project CircularInooBooster and its accelerator CirCoAX, on Saturday 6 November. Subsequently, on Monday 8 November, the awards for innovations in the field of prevention, management and reduction of forest fires will be presented by the Interreg project Iberian Centre for Research and Fight against Forest Fires (CILIFO). Finally, on Friday 12

November, the sustainable mobility challenge will be awarded with the support of Malaga City Council.

Finnova mentioned the Ibero-American congress of Family Businesses and SMEs on Wednesday 20 October in Alcobendas (Madrid) as part of the cooperation sessions of the NEXT LATAM-EU GENERATION conference.

The project proposed with Next LATAM-EU Generation was born after the Ibero-American Congress of Family Businesses and SMEs, held last January by the Business Market Network. In the congress was highlighted the need for transatlantic collaboration to face common challenges in both continents, such as COVID-19. In this sense, sharing knowledge and creating synergies are the fundamental pillars of these monthly conferences that cover topics framed in the SDG of the United Nations and promote innovation through the open innovation methodology of the European Commission that implements Finnova Startup Europe Awards.

The Next LATAM-EU Generation cycle is divided into nine online events held on the second Tuesday of each month related to the United Nations SDG. These events end with the StartUp Europe Awards ceremony of the European Commission.

On the first conference, held on 8 March to coincide with International Women’s Day, speakers such as, Patricia Llombart, former ambassador of the European Union to the Republic of Colombia; Liskel Álvarez, councillor delegate for external action of the inter-island council of Tenerife and Adriana Vargas, head of the trade section of the Colombian Mission to the European Union, discussed the vision of women in LATAM-EU business cooperation, within the framework of innovation and entrepreneurship. The second conference, on 6 April, entitled “Challenges and opportunities for tourism through LATAM-EU cooperation in the context of the COVID-19 health crisis” was held on the occasion of World Health Day, dealt with the actual

challenges facing the tourism sector and how to address them. Manuel Vegas, president of the spanish Association of Hotel Managers (AEDH), Antonio López de Ávila, co-founder and CEO of Tourism Data Driven Solutions (TDDS) and Irene Sánchez, business creation manager at EIT Health Spain, among others, took part in the event.

The third conference, held on 11 May same day as the World Recycling Day, was entitled: “Challenges of the circular economy in LATAM-EU cooperation as a model of production and consumption for sustainability” and was attended by Isabel Silva Souza, ambassador of the European Commission’s Climate Pact, Álvaro Hernández, president of the Board of Directors of Inboplast, Sharam Yalda, partner of CirCoAX and founder of HumanNation, Alonso Salguero, CEO of GTA Ingeniería y Medioambiente, and Giuseppe Liberati, executive director of Bridging Value, among others.

The fourth webinar of the Next LATAM-EU Generation cycle, “Entrepreneurship and water: Engine of economic recovery and social development of regions and municipalities“, was held on Tuesday 13 July during the celebration of World Population Day and World Oceans Day. It was attended by Rafael Heredero, policy advisor at EurEau secretariat (Brussels), Javier Vázquez Hueso, EMALGESA CEO and deputy mayor of Algeciras City Council, Luis Lehmann, international expert in circular economy, Juan Carlos Gázquez, director of Cajamar Innova – Incubator of High Technology Companies in Water in Cajamar Foundation, Josu Gómez Barrutia, Red Business Market CEO, and Adrián Nadal, Bioferric Ink CEO, among many others. On Tuesday 10 August, the fifth day of the NEXT LATAM – EU Generation sessions took place, with the honorary participation of H.E. Mr. Darío Chiru, Panama’s ambassador in Belgium. The event, entitled “Training and mobility opportunities for young professionals and entrepreneurs”, was held on World Youth Day by Finnova and Startup Europe Awards in collaboration with Red Business Market and the Ibero-American Congress of Family Businesses and SMEs. The aim was to offer training opportunities within the framework of

the EU, promote transnational mobility and improve the employability of young people.

On 21 September, the sixth event was held as part of the proposals planned for Next LATAM-EU Generation. The event focused on sustainable development and circular economy for professionals in the tourism sector in Latin American countries (LATAM) and the EU countries, with the participation of Natalia Bayona, director of innovation, education and investment of the World Tourism Organization. The aim of the conference was to highlight the importance of tourism in the national and international economy and to generate synergies or common projects between the two areas.

Finnova is a foundation working to promote and to develop innovation and the entrepreneurial spirit across the EU. Based in Brussels, it works and engages in partnerships in all EU countries. Finnova’s experience in leading communication activities and disseminating European projects is coupled with an extensive expertise in creating enterprises and entrepreneurial support programmes such as accelerators, incubators, and events.