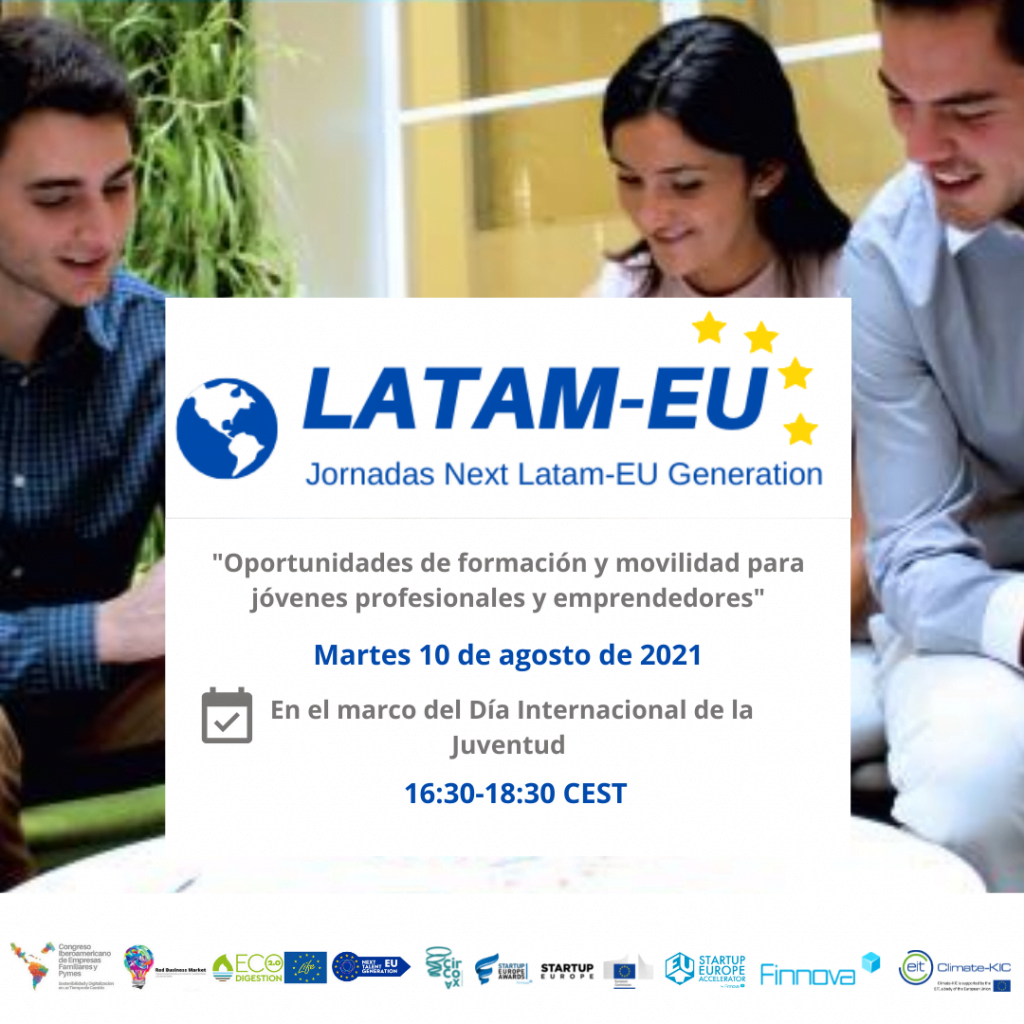 Brussels, 11.08.2021 – On Tuesday 10 August, on the occasion of International Youth Day, Finnova Foundation and Startup Europe Awards, together with Red Business Market and the Congreso Iberomaericano de Empresas Familiares y Pymes, held the fifth session of Next LATAM-EU Generation, named “Training and Mobility Opportunities for Young Professionals and Entrepreneurs”. The goal of this session was to forge partnerships bringing together different types of entities to offer in a single platform training opportunities in the EU, to promote cross-border mobility and to enhance the level of employability of young people. This event was attended by His Excellency Mr Darío Chiru, Ambassador of Panama in Belgium.

The fifth session, which was held from 16:30 to 18:30 (CEST), was broken down into five panels chaired by Juanma Revuelta, CEO of Finnova Foundation. Throughout the event, Mr Revuelta stressed that “young Latin Americans have numerous mobility and job opportunities in Europe at their disposal”.

Mr Castro kicked off the panel by introducing finance and cooperation opportunities both for individuals and institutions offered by European schemes like Erasmus+ (higher education, vocational training and youth organisations) and Marie Skłodowska-Curie (doctoral and post-doctoral research). Later on, Moisés Álvaro declared that “EIT Climate KIC is tasked to tackle climate change through public-private partnerships. Thanks to EIT Climate-KIC’s climathons, the most important hackhaton in terms of climate innovation among others, we manage to give a hand to young entrepreneurs”.

The following panel was devoted to European funds. In it, Adrián Noheda talked about the different ways non-EU countries can benefit from EU funds. He stated that “Argentina, Bolivia, Colombia, Peru, Ecuador, Paraguay and Venezuela, among others, may be eligible for funds under Horizon Europe”.

As regards other funding facilities, such as LIFE, Mr Noheda pointed out that “although it is quite difficult to integrate enterprises from non-EU countries, we in Finnova propose creative solutions such as incorporating branches in Spain or justifying the implementation of an innovative technology”. A good example of this is LIFE ECOdigestion 2.0, by Global Omnium and Finnova. It has a €1 M budget and will last for four years. In essence, this project will implement new technologies promoting the circular economy and the mitigation of climate change.

María José Valero, CEO of Talent Growth Management, also talked about LIFE ECOdigestion 2.0. Thanks to her support, five girls from Technovation Girls CV developed and app whereby they took part in Finnova’s challenges. This app encourages the re-use of food wastes by drawing inspiration from LIFE ECOdigestion 2.0. These five students subsequently visited the wastewater treatment plant located in Quart the Poblet (where the project is being tested) and operated by Global Omnium.

After the European funds section, the floor was given to His Excellency Mr Darío Chiru, Ambassador of Panama in Belgium. Having an extensive background in international affairs, Mr Chiru expressed his concern vis-à-vis youth employability, by claiming that “young people aged 15 to 29 make up one third of active population. 10 years back, they accounted for 1 out of every 4 jobs; nowadays, young people account for only 1 out of every 10 jobs”.

The fifth session of Next LATAM-EU generation also discussed the role of universities in promoting young entrepreneurship, especially regarding under- and graduates.

Speaking from Ideas UPV – the Entrepreneurship Department of Universitat Politècnica de València –, Lorena Pedros said that her department has been the first one in Spain to assist students and staff to develop their business ideas. From 1992, Ideas UPV has helped over 8000 entrepreneurs.

Later on, Frank Babinger, advisor to the Employability and Entrepreneurship Department of the Vice-Chancellor’s Office in the Universidad Complutense de Madrid, said that “our university has pre-incubators in all faculties. This means that we foster entrepreneurship in humanities, social sciences, exact sciences, etc.”

Jose María Imbert, speaking from Yes Europa, showed attendees the possibility to take part in programmes such as short-stay Erasmus grants (one to three weeks), in which “young people from all over Europe get together to develop a small European project in any city across the Union”. Mr Lambert also talked about European Solidarity Corps, i.e. a volunteer programme whereby young people can improve their employability prospects. In addition, according to the speaker, “any youth irrespective of whether they are EU nationals or not can take part in this scheme. The only prerequisite is for them to be residents”.

The fifth session of Next LATAM-EU was wrapped up by two young people who benefited from European programmes and who shared their experiences with the audience.

Renan da Silva, a youth from Florianópolis (southern Brasil),explained the differences which exist between both continents. As a beneficiary of a Unia Beca grant from Universidad Internacional de Andalucía, he urged Latin American countries to “endorse youth employability just as it is done in Europe. […] I am very lucky and grateful to have taken part in this project”.

Thanks to her experience at Interreg CILIFO, a project under Interreg Volunter Youth, Ana Piñero was able to learn how a cross-border European project is programmed and managed. She also seized the opportunity to encourage attendees to get out of their comfort zone, just as she did – Ms Piñero worked as a communication officer in CILIFO despite holding a BA and a MA in Law.

“I would like to encourage all youth to take part in projects like Interreg Youth or European Solidarity Corps. The downside of it is that you can only take part once”.

The first LATAM-EU session was held on March 8 on the occasion of International Women’s Day. It was run by several female speakers, such as Patricia Llombart, EU Ambassador in Colombia, Liskel Álvarez, External Actions Senior Officer at Cabildo de Tenerife, and Adriana Vargas, head of Trading Links of the Colombian Mission in the EU. The goal of this event was to discuss the role of women in business cooperation between Latam and the EU, especially as regards innovation and entrepreneurship.

The second session, which was held on April 6 – on the occasion of World Health Day (7 April) –, was named “Challenges and Opportunities for Tourism through Cooperation between Latam and the EU during Covid-19”. Its main topics were the challenges that the tourism sector has to face and how to. This session was attended by Manuel Vegas, president of Asociación Española de Directores de Hotel (AEDH); Antonio López de Ávila, co-founder and CEO of Tourism Data Driven Solutions (TDDS), and Irene Sánchez, business creation manager at EIT Health Spain.

The third session, which was held on May 11 on Global Recycling Day (17 May), was named “Challenges of Circular Economy in LATAM-EU Cooperation as a Production and Consumption Model for Sustainability”. Speakers included Isabel Silva Souza, Ambassador of the European Commission’s Climate Pact; Álvaro Hernández, Chairman of the Board of Directors of Inboplast; Sharam Yalda, partner of CirCoAX and founder of HumanNation; Alonso Salguero, CEO at GTA Ingeniería y Medioambiente, and Giuseppe Liberati, Executive Director at Bridging Value.

Next LATAM-EU Generation is made up of nine online events which will take place every second Tuesday of each month. Each event is held on the occasion of an International Day in line with UN SDGs. To top it all off, if the health situation allows it, an on-site event will be held in Medellin (Colombia) to celebrate the final of LATAM Startup Europe Awards.

LIFE ECOdigestion 2.0 is a European project which utilises a digital control system to automatically pump specific amounts of organic wastes into anaerobic sludge digesters in order to maximise the on-demand production of biogas – a renewable energy source.

The project has been designed to make biogas a reliable source of green energy to meet the industrial energy demand and to comply with the EU’s goal to produce at least 27% of energy out of renewable sources by 2030. This system is of special interest to Europe, as there are 18,000 wastewater treatment plants which account for 0.8% of all energy consumption.

The project was initiated on 01/09/2020 and will operate until 29/02/2024. It is coordinated by Global Omnium Medioambiente and partnered by Finnova Foundation and Portuguese consortium Águas do Centro Litoral. It has a €970,000 budget.

Finnova Foundation is a Belgian-Spanish foundation which helps institutions and organisations getting funds for innovative projects. Its objective is to promote private-public cooperation through innovation in order to address social challenges, e.g. employment, training, entrepreneurship, SDGs, circular economy, etc. Finnova is in charge of organising Startup Europe Awards, a joint initiative by Finnova and the European Commission to reward the best European start-ups.

Startup Europe Awards is an initiative by DG CONNECT and has been implemented by Finnova Foundation since 2016. Startup Europe Awards are an open innovation mechanism aimed to identify disruptive start-ups and to promote private-public partnerships. They also seek to raise awareness on the importance of self-entrepreneurship as a driving force for job creation. In addition to promoting networks to meet the UN SDGs and the European Green Deal objectives, they also contribute to circular economy, sustainable tourism and fighting against climate change.

Business Market is a forum connecting investors, businesses, entrepreneurs and start-ups from Ciudad Real aiming to create a network of business, financing and support for economic and business projects in that area. All this funding can be coupled with venture capital, business angels, personal investments and corporate or financial funds for innovative and disruptive initiatives with an added value which need funding to start operating. For more information, click on https://www.youtube.com/watch?v=z-vd9gSy19s