NEXT GENERATION EU FUNDS 2021-2027:the Canary Islands are the first autonomous community to organise a massive public-private training meeting to raise funds for economic recovery with more than 700 participants 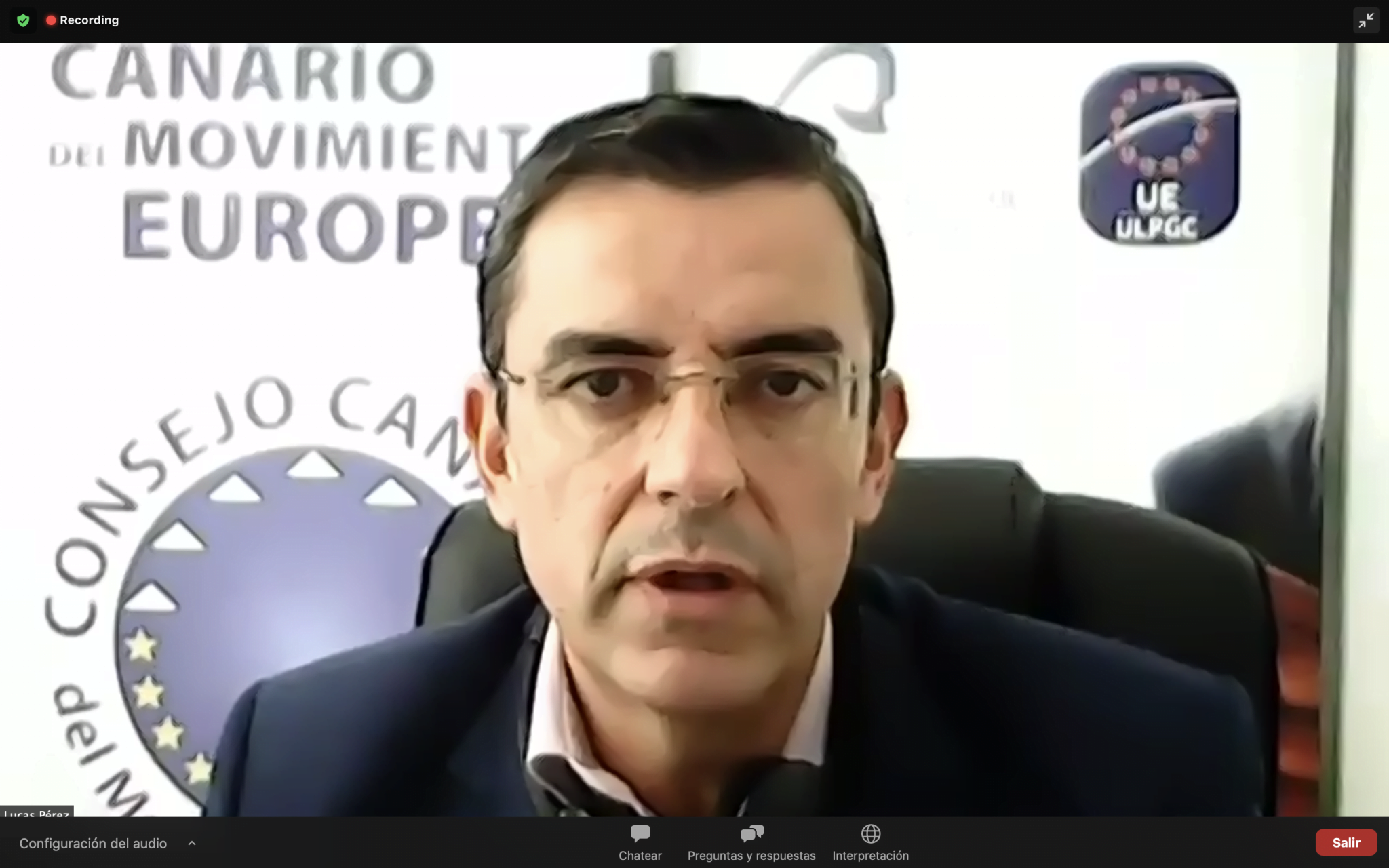 The Canarian Government is leading a public partnership for training on the Social and Economic Recovery Fund in the Canary Islands, co-organised with the University of Las Palmas, the University of La Laguna, the Canarian Council of the European Movement, the Finnova Foundation and Atlantic Euroconsulting and addressed to public administration, private companies and the third sector in the Canary Islands.

Gran Canaria, 25th of January. The new financial period begins with the milestone of being the largest and most ambitious economic recovery effort in history, with 12% of the EU’s GDP, compared to the Marshall Plan, which at the time was 1.5% of GDP. Spain has been allocated 150 billion euros, so the Canary Islands should make effective use of its quota to meet the challenges of employment, economic recovery, innovation in tourism, sustainable agriculture and sustainable development.

Almudena Estévez, Vice-Minister of Economy and Internationalisation of the Canarian Government, was responsible for the inauguration of the training programme on project presentation in the Canary Islands EUROPEAN FUNDS NEXT GENERATION. Rosa María Aguilar, Rector of the University of La Laguna, stressed the importance of a competitive and diversified economy and Rafael Robaina, Rector of the University of Las Palmas in Gran Canaria, underlined the role of universities in the process and the need for a more resilient economy.

The virtual meeting allowed attendees to connect with Brussels, with senior officials from the European Commission and MEPs such as Juan Fernando López Aguilar, Chairman of the Committee on Civil Liberties, Justice and Home Affairs in the European Parliament, who encouraged the Canary Islands to take advantage of the financial opportunities. On behalf of the European Commission, Miguel Gil Tertre, Head of unit in the Task Force RECOVER, participated, as well as Massimiliano Dragoni, senior Official in the Directorate-General for Communication Networks, Content and Technologies (DG CONNECT), who explained the importance of digitalisation and the STARTUPEUROPE methodology to promote entrepreneurship and self-employment. On behalf of DG GROW, Directorate-General for Internal Market, Industry, Entrepreneurship and SMEs, Rudy Aernoudt, Chief Economist, spoke, highlighting in macroeconomic terms the EU’s effort and describing NEXT GENERATION as the most ambitious economic recovery programme in history, equivalent to 12% of EU GDP and comparing it to the Marshall Plan, which was 1.5% of GDP.

Lucas Andrés Pérez, Vice President of the Canary Islands Council of the European Movement, announced the start of the “new period of EU funds in the 2021-2027 seven-year period, with an unprecedented economic recovery plan“. For his part, José Manuel Martínez, State Civil servant and Secretary of Valladolid City Council, spoke of the contractual and sectoral management of European funds, which, according to him, ” they represent a great effort and responsibility, after the economic situation caused by the COVID-19 health crisis”.

Juanma Revuelta, CEO of Finnova, insisted on reinforcing the holistic vision that allows synergies and financing projects by identifying the most appropriate financial tool, converting LIFE or Interreg pilot projects that have worked into Next Generation projects, “It is about turning the Canary Islands archipelago into an island laboratory of practical innovation of demonstration projects in water efficiency, renewable energies, agriculture and sustainable tourism, promotion of the blue economy and innovation in the agricultural sector,” said Revuelta. He also urged the Canary Islands to take advantage of its fiscal attractiveness and geographical location as a gateway to Africa and a platform towards Latin America and recommended the public-private participation methodology to help reprogramme 12.3 billion euros that Spain has not absorbed in the 2014-2020 period, a period in which approximately 65% of the funds have not been spent, with Spain being the last EU country in terms of absorption.

During his presentation, Juan Viesca, Director of Funds at the Finnova Foundation, explained the different funds provided by the European Commission and underlined the lack of benefit that Spain has derived from all this, since “it has only spent 20,000 million of the 44,000 million available”. The Next Generation programme adds even more funds, which Viesca describes as “difficult to spend”, and proposes that the Canary Islands “exploit the exclusive axis available to them: that of the ultra-peripheral regions, which would mean even more budget for the islands”.

Cristina Tavío, an International Consultant from Finnova Brussels, began her speech with the slogan “for a fair, green and digital recovery” and recalled that “there will be no green without blue, as many of the answers to resilience and sustainability come from the seas and oceans”. The Canary Islands, bathed by the Atlantic Ocean, would be a source for diversifying the economy and meeting the green challenge (or Green Deal), through its maritime strategy. Furthermore, Tavío recalled that “the revolution towards resilience to which the EU is encouraging us is a green revolution which, of course, must also be digital”.

In the closing session, Carolina Lechado, engineer and Director of the EU funds area in Water and Circular Economy, intervened from Tenerife, who alluded to the water problem and stressed the importance of the circular economy and low-cost sustainable desalination: “Of all the water on the entire planet Earth, only 2.5% is fresh water. And of that 2.5%, less than 1% is available for human consumption”, explaining different LIFE projects that have become Next Generation.

José Manuel Requena, Director of European Territorial Cooperation at Finnova, mentioned the importance of capitalising Interreg projects in the framework of Next Generation. These are an engine of economic impulse and job creation, based on the good practices and results already worked in the intervention territory. Therefore, he encouraged Interreg MAC and Europe project partners to host a young Canarian to train the necessary professionals in the management of European affairs.

In the area of business recovery, Adrián Noheda, Director of the Innovation and Internationalisation Area of Finnova offered companies and entities with innovative solutions in the field of firefighting and recovery of burnt areas free support in fundraising and legal advice from the accelerator Firefighting Open Innovation Lab CILIFO (24.5 million euros). In the field of textiles and circular economy, he explained the recently approved COSME CircularInnobooster project, which finances start-ups in the textile and sustainable fashion sector to access Horizon Europe and LIFE programmes. This methodology could become a Next Generation project in the Canary Islands: “If we present projects to Next Generation based on projects with seals of excellence or LIFE, we guarantee their continuity and success in their execution“.  Regarding the funds for youth training, Héctor Juan, junior Project Officer in sustainability and circular economy, from Atlantic Euroconsulting Fuerteventura highlighted the opportunities for biodiversity, green employment and circular economy in the Canary Islands. He also encouraged young people to take advantage of the NEXTALENT GENERATION programme and other ones such as Garantía Juvenil to be trained in Brussels as a European affairs manager.

Jorge Núñez, Senior Researcher at the Centre for European Policy Studies (CEPS) in Brussels, explained the ways of qualitative and quantitative measurement of the social impact that Covid-19 has had and will have, alluding to GDP and highlighting the high unemployment rate and the environmental problems arising from the current health crisis.

Canary Islands and Next Generation Training Platform: next steps for the period 2021-2027, with implementation until 2030

The Canary Islands has been a pioneer in Spain starting the new financial period 2021 with the organisation of these training days, which have had a massive learning impact, with more than 700 registered participants and reaching more than 390 participants connected simultaneously.

27% of the registrations came from public administrations, 38% from private companies, 8% from the third sector, 9% from public companies and the remaining 18% of participants were from other organisations, such as universities or journalists.

With regard to the projects generated on the first day, 41 proposals were received. In the coming days and until 25 January 2021, at 00:00 h, the deadline for submitting challenges and solutions will be opened. The Finnova Foundation and Atlantic Euroconsulting have created an electronic platform for Networking and Project Board, which is available to the Canarian society for participants, who will be able to join the challenges in the Canary Islands by fulfilling a form.

On Wednesday 27th and Thursday 28th January, Thematic Innovation Project Tables will be set up on good practices of the UN SDGs challenges, such as employment, sustainability and recovery, and to identify challenges that require innovative solutions to add the following four links:

– Find technological solutions to these challenges.

– Identify the most appropriate European funds and financial lines.

– Identify and put together the entities that can be linked.

The way it works is as follows: On each day there are different panels, organised by theme, in 30-minute sessions, with speakers who are experts in European Funds. Those interested can participate in the session on Wednesday 27th and interact with the speakers of the first session, which took place on Wednesday 20th January. Those interested in contacting the speakers of the second day, held on Thursday 21st, will be able to participate in the session on Thursday 28th.

The Finnova Foundation, in collaboration with the Canary Islands Health Service, and Atlantic Euroconsulting are launching the “HealthCare Waste Startup Europe Accelerathon” challenge to offer solutions to the challenge of reducing healthcare waste.

According to the World Health Organisation (WHO), 85% of the waste generated by healthcare activities is non-hazardous compared to household waste, while the remaining 15% is considered hazardous material, whether infectious, chemical or radioactive. This is a fact to be taken into account, as waste management and hygienic conditions are essential to protect human health during outbreaks such as Covid-19.

Atlantic Euroconsulting works every day to offer the best advice and management of European funds to public and private companies. Other areas of expertise include renewable energies, sustainable development, circular economy, water and waste management, employment and youth, TC and tourism, among others. With all this, Atlantic Euroconsulting aims to promote a culture of innovation through smart strategies and practices in different entities, institutions, organisations and communities across the EU and other geographical areas.