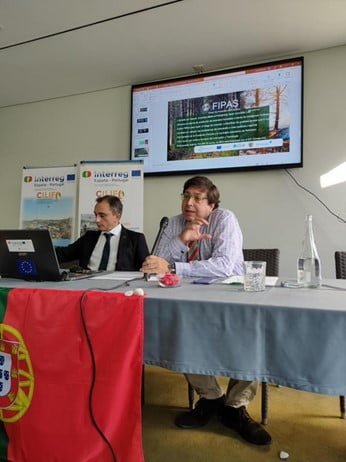 Brussels, 19th of October of 2022. The European initiative FIPAS (Forest Fire Prediction Alarm System) could prevent 3% of the planet’s surface from burning annually. This was stated by Juanma Revuelta, CEO of Finnova, during the event “Territorial cohesion and green transition in fire prevention and protection” organised in the framework of the Interreg-CILIFO programme in the Portuguese town of Monchique on 13 October.

Lola Bordás, marketing director at Finnova, and Juan Manuel Revuelta explained at the event the FIPAS project led by Nassat, supported by Climate-Kic to implement a pilot project in Pechvevo, North Macedonia. The main objective of the initiative is to measure the risk of fire in order to prevent it, as well as to identify the causes that could be fuelling it. By this way, FIPAS could prevent a repetition next year of the 290,000 hectares burnt in Spain, as Juan Manuel Revuelta pointed out. A year described as “annus horribilis” in terms of forest management and fire fighting.

Every year, an average of 3 % of the planet’s surface is burned. “The lungs of the planet that allow us to generate oxygen and fight climate change could be less affected with FIPAS,” Juan Manuel added. In order for this not to happen, “we are working with international organisations on new projects in this area, such as FIPAS, a living example of this”, said Lola Bordás.

Furthermore, in order to carry out this initiative, FIPAS has a total budget of 144,500,00 euros, of which 80% will be funded by the EIT Climate-KIC, the EU’s climate innovation agency working to accelerate the transition to a resilient, carbon-free world through systems transformation.

Nassat is a leading company in the Information and Communication Technologies (ICT) sector that addresses particularly complex problems affecting organizations, companies, institutions and communities, inherent to deficiencies in telecommunications infrastructures, in many cases non-existent.

Finnova is the European foundation for innovation financing. Its objectives are to promote public-private cooperation through its knowledge and experience in European funding instruments, addressing societal challenges such as youth employment, entrepreneurship, the UN SDGs, the circular economy, waste recovery, sustainable tourism and the fight against climate change.

EIT Climate-KIC is the EU’s climate innovation agency working to accelerate the transition to a resilient, carbon-free world through systems transformation. Headquartered in Amsterdam, EIT Climate-KIC operates from 13 centres across Europe and is active in 39 countries. EIT Climate-KIC was established in 2010 and is primarily funded by the European Institute of Innovation and Technology (EIT), an agency of the European Union. As a Knowledge and Innovation Community (KIC), EIT Climate-KIC brings together more than 400 partners from business, academia, public and non-profit sectors to create networks of expertise through which innovative products, services and systems are developed and commercialised for greater societal impact.