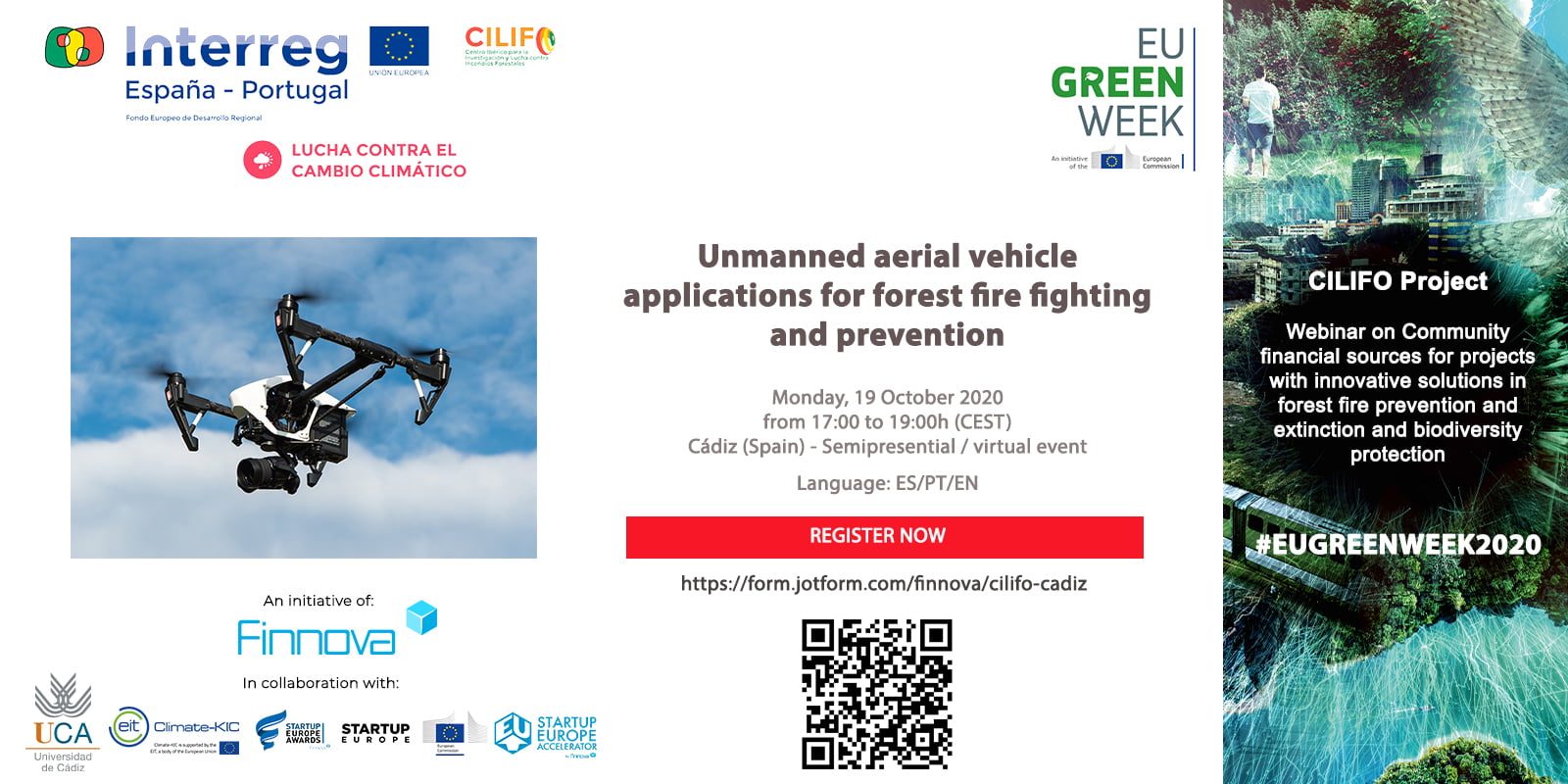 21.10.2020. European Green Week (#EUGreenWeek), organised by the European Commission, focuses this year on nature and biodiversity. The Finnova Foundation, the entity which will benefit from the INTERREG-CILIFO project, prepared a localised event to form part of a week which will act as a milestone on the way to the Conference of the Parties (COP 15) to the Convention on Biological Diversity, in collaboration with the University of Cadiz, which is also part of the CILIFO project partnership.

Last Monday, 19 October 2020, the Iberian Centre for Research and Fight Against Forest Fires (CILIFO) held the third event of the CILIFO Project within the framework of #EUGreenWeek – it has planned another in Córdoba, on European Union funding for innovative projects to fight forest fires and protect biodiversity. The event was partially focused on the applications of unmanned aerial vehicles for the extinction and prevention of forest fires.

The highest number of visitors at Zoom was 60, however, the total number of people registered at Zoom for the event was 107 (but not all were connected at the same time).

During the session on Community financial sources for projects with innovative solutions in the prevention and extinction of forest fires and the protection of biodiversity, public entities intervened, such as the Directorate General of European Funds of the Ministry of Finance of the Government of Spain or the Agency for the Environment and Water of Andalusia (AMAYA) – Government of Andalusia. In addition, several initiatives were presented, such as the implementation of drones with thermal cameras to control the dead zones of the fires; or materials that hydrate and when thrown into the fire manage to extinguish a fire by themselves and at the same time increase the percentage of reforestation of the area after the fire has passed.

Below you can read some of the statements of the speakers who participated in the third CILIFO webinar in the framework of #EUGreenWeek: 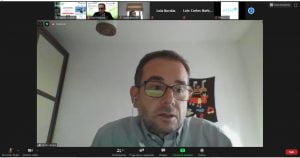 “Among the objectives that CILIFO has, we can highlight the strengthening and pooling of cooperation, working procedures and training in the prevention and extinction of forest fires, promoting innovation to prevent large forest fires and improving the response capacity to forest fires on the part of the administrations and authorities involved in fighting them in the three participating regions”.

“In order to give continuity to CILIFO, a new application called FIREPOCTEP has been submitted under the same heading, with the aim of strengthening cross-border systems for preventing and extinguishing forest fires and improving resources for generating rural employment, acting in the development, protection and promotion of the natural heritage, researching and innovating in the environmental field and improving the institutional capacity of administrations and the public sector”. 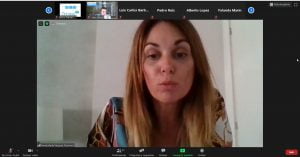 Luis Carlos Barbero González, Professor of Petrology and Geochemistry and Director of the Department of Earth Sciences – Campus of International Excellence CEI-MAR of the University of Cadiz

On the realistic application of the drones on the ground in fire crisis situations: “the thermal cameras guided the firefighters very reliably to manage the fires by guiding them through the smoke, they should be used in fires that are not very large and in which the economic resources are rather high, in addition the monitoring and control tasks that the drones would have during rainy conditions should be improved”. 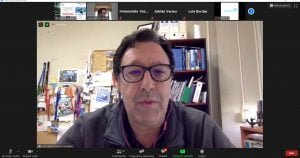 “Through training and the employability of people with disabilities, getting involved in a project in which we promote universal accessibility, in which people with disabilities have no physical barriers to communication and technology. In addition, they carry out training so that if a professional meets a person with a disability he or she can evacuate them in the correct way, communicate with them, etc. And from November (2020), a 15-hour course will begin on what to do when interacting with someone with a disability”. 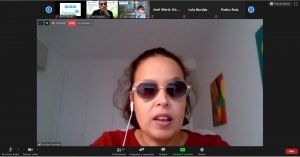 Juan Viesca, Director of European Funds at the Finnova Foundation.

“The European Commission announced a new programme with 750,000 million euros to replace the crisis and propose new solutions, within which there is the REACT UE programme, a programme that could complement the structural funds with 50,000 million euros. In addition, there is a specific call for the fight and prevention of forest fires as part of the Green Deal call for innovative proposals that ends in January 21, which is a very good opportunity for the speakers at this webinar to be financed by this type of programme”. 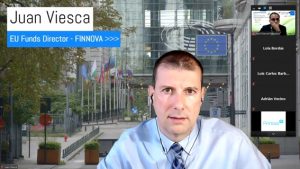 Alberto Navarro, Director of Projects, Human Resources and Training at the Finnova Foundation.

Alberto presented two E-learning platforms available within the CILIFO Project to the attendees, with innovations such as gamification processes, encouraging interaction through the website with the students, with mini-games and as the course progresses: “a city is created, comparing the construction of a city with the training that is gradually taking place in each of the students”. 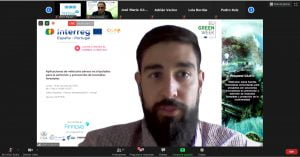 “Within the Firefighting Open Innovation Lab – CILIFO accelerator, we offer a working space, pilot tests, European funding, European projects, partner search and legal advice. In addition, work is currently underway on a catalogue to include an article by each company on how to fight forest fires and to provide information on companies if interested”. 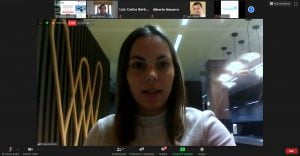 “Our mission is to develop all the aeronautical platforms and aircraft so that we can consolidate ourselves as a reference in this field and, above all, we want to solve the problem of fire and fire-fighting. Our solution is to offer our services to work 24/7 and try to minimize risks regarding fire fighting”. 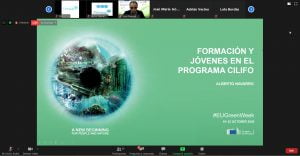 “Scodev’s idea is a device by which conventional aircraft could assist in fire-fighting, allowing a common aircraft to collect water from the sea, a river or a lake at a height of 50 feet and pour it over the affected area up to 5 times per hour. This method will expand the resources of any municipality in using fire-fighting tools. 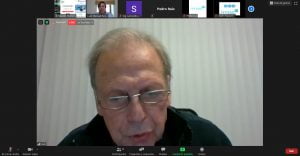 “We developed an application for tracking (positioning) and communication when facing fire, combining several technologies, such as the new European satellite positioning system Galileo. We are also mixing new communication technologies to ensure that we always have communication at all times and in adverse situations”.  Thanks to these features, firefighters will be able to face the fire as well informed and positioned as possible, which is certainly a great approach. 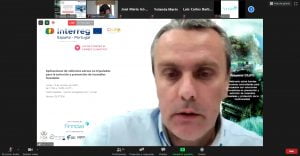 “Lluvia Sólida” is a technology that retains water up to 400 times its weight in water, and we place it at the root, thanks to this the plant will remain hydrated for weeks without the need for water or rain, after which it returns to its original granulated state and is rehydrated with the next watering or rain, reducing the frequency of watering. As far as fire fighting is concerned, what we do is throw the already hydrated granulate at a prudent distance from the fire, creating a stream of solid water, leaving the fire to go out by itself, and after these fires it is reforested with solid water again and can be saved in around 70% to 80% of the reforested areas”. 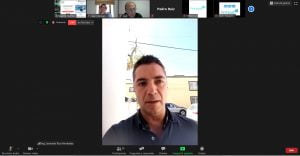 “The aim of the GEFRECON project is to reduce the risk of forest fires in the POCTEP territory by developing and implementing joint plans to raise awareness among other types of actors, so that this type of case can be managed jointly and damage can be minimised. The first of these tools is a GIS (Geographical Information System) in which a landowner or municipality can select an area in which they intend to analyse the potential for use of biomass and the cost of extracting this biomass and taking it to a transformation centre”. 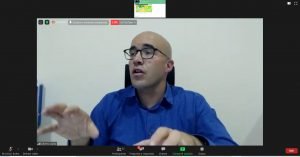 The StartUp Europe Awards (SEUA) are a very useful open innovation tool to promote the exchange of experiences, add value to the business ecosystem and help start-ups to grow and position themselves in the market. The Finnova Foundation – the beneficiary of the CILIFO Project – supported by the Committee of the Regions and the European Commission, specifically by the Directorate General for Communication and New Technologies (DG CONNECT), has already celebrated and successfully launched several editions of these awards; and is organising the 2nd Edition Firefighitng StartUp Europe Awards (SEUA-CILIFO). “The StartUp Europe Awards, from 2016 onwards, is an initiative promoted by the European Commission and implemented by Finnova, supporting entrepreneurship across Europe. The award is a fast-track ticket for the winning project. “Within the Firefighting StartUp Europe Awards (SEUA-CILIFO) “We encourage and support all those projects that have to do with the prevention, action and regeneration of forest fires”.

The final ceremony of the Firefighting StartUp Europe Awards will be held within the framework of the European Week for Waste Reduction (EWWR), on Monday 23 November 2020: 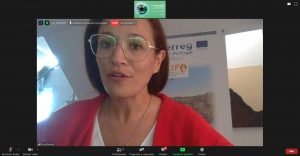 “In Uffire we have an extinguishing backpack that feeds back the smoke from the fires, eliminating the oxygen through air expulsion. Right now we are already working on the third prototype of the product, making it more and more powerful. The rucksack, which weighs 9 kg and has an autonomy of 5 hours, can do the same thing as 10-ton fire-fighting equipment, which is a very advantageous ratio for the Uffire product”. 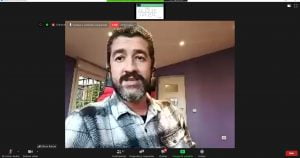