The European project Enerbuild, a practical example of solutions to COP27 in energetic area 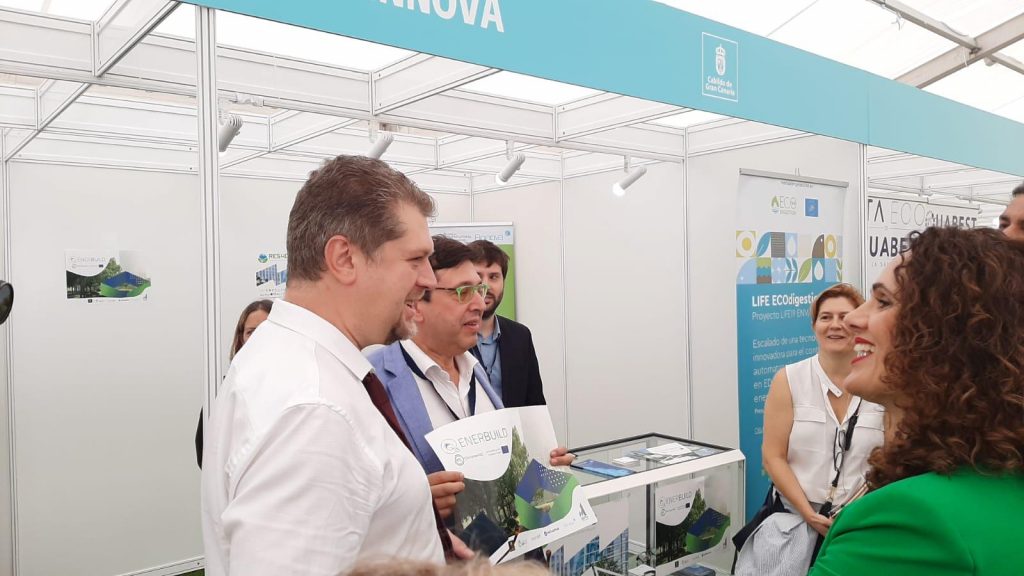 COP27, a climate summit that ended on 20 November, discussed, among other issues, the pressing need to seek new alternative energy sources to fossil fuels in order to move towards decarbonisation and mitigate climate change. In addition, as a novelty, the creation of a fund to finance projects that contribute to combating the main problems in climate issues was announced. A modus operandis very similar to that applied by the European Union in which projects such as Enerbuild, an energy optimisation system successfully implemented in the social and health centre, El Sabinal, in Gran Canaria, are being developed.

Enerbuild is a European Project of energetic optimization led by the Island Council of the Gran Canaria Energy, fund the 75% by EIT Climate-KIC, European Community specialised in innovation and knowledge in climate action. An initiative that pretends to combat climate change with Smart-building technology and the Internet of the Things to get reducing energy expenditure.

Installed in the El Sabinal socio-health centre, a building donated by the Cabildo de Gran Canaria and used as a residence for the elderly, the project is proving to be a great success. “Enerbuild saves 15% of energy costs in buildings”, explained Juanma Revuelta, CEO of Finnova, during the presentation of the project at the 13th International Fair of Canagua and Energy, where Enerbuild served as an example of good practice.

A system that, after the good results recorded, is presented as a tool that could be implemented in hospitals, residences or even in hotel chains, where it could help to face the escalation of energy prices while mitigating emissions, concluded Revuelta.

Led by the Gran Canaria Island Energy Council (CIEGC), Enerbuild Managua has the collaboration of Finnova Foundation, the Macedonian Smart-Up Innovation Lab, the Internet of Things platform HiPerWare, a tool of the German group BPS International dedicated to Big Data, and the Portuguese smart maintenance platform Infraspeak. The latter two companies are developing a combined solution based on analysing and monitoring supply systems by collecting Big Data, with the aim of detecting anomalies and providing recommendations on system optimisation, which are achieving the main objective of this European project: mitigating the effects of climate change by raising awareness among citizens, companies and institutions and strengthening innovation ecosystems at national and regional level.

Otherwise, Enerbuild not only makes a beneficial contribution to energy, it also supports projects linked to the goals of the 2030 Agenda, such as the GIRLS4TECH, program, which is linked to SDG 5, Gender Equality. A program that supports STEM careers for young people, especially girls, and brings innovative European-funded solutions such as Enerbuild to young people.

Finnova is a Spanish-Belgian non-profit foundation based in Brussels (Belgium) with a presence in Spain in the Valencian Community, the Basque Country, Andalusia, the Community of Madrid, Extremadura and the Canary Islands. The foundation works for the promotion and development of innovation and entrepreneurship at EU level and operates through collaborations and partnerships in all EU countries. Finnova’s experience in leading communication and dissemination activities of European projects is combined with a solid proven track record in business creation and business support programs, such as accelerators, incubators and incubators. It is also committed to the training and employability of young people.

About the Island Council of the Gran Canaria Energy

An organisation associated with the town hall of Gran Canaria that was created with the intention of promoting clean energies, stimulating different energy saving and efficiency policies in homes and economic sectors of the islands, while at the same time promoting research, development and technological innovation together with town councils and other institutions.

EIT Climate-KIC is a community dedicated to innovation and knowledge in climate action. It identifies and supports different initiatives or projects that contribute to the fight against climate change and promote decarbonisation and energy transition.

It is part of the European Institute of Innovation and Technology (EIT), an independent body of the European Union dedicated to increasing Europe’s competitiveness in areas such as sustainability, economic growth and job creation.

BPS Group is a German company operating in the field of technology and the real estate market. The firm has developed HiPerWare, an end-to-end platform that with the help of Big Data and the Internet of Things can perform technically complex real estate operations in real time. The data, obtained through sensors placed in buildings or equipment, are analysed in the cloud and processed with thousands of variables that allow to visualise operational processes in 3D and improve the efficiency of maintenance.

Infraspeak is the developer of an intelligent maintenance management platform, a state-of-the-art software capable of connecting to different resources such as platforms and sensors. Infraspeak has extensive experience in the implementation of its software and its connection to Internet of Things sensors, bringing its services to more than 400 customers around the world.