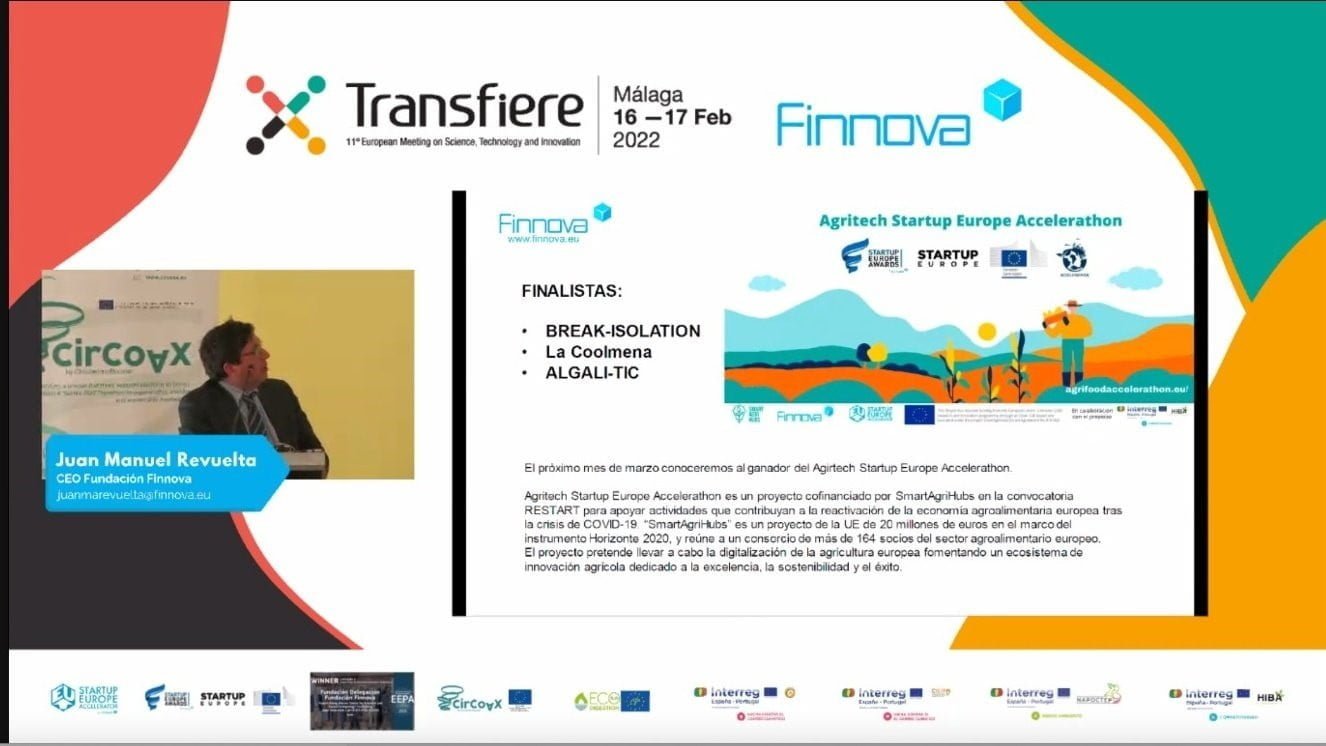 The Transfiere Forum was held on 16 and 17 February at the Trade Fairs and Congress Centre of Malaga (FYCMA), as the main R&D&I meeting in Southern Europe to share scientific and technological knowledge, promote innovation and connect science and business.

The Finnova Foundation participated in this forum with its own space to present European funding opportunities for entrepreneurship and innovation.  In the framework of Transfiere, the foundation introduced the Agritech Startup Europe Accelerathon, a proposal co-funded by SmartAgriHubs in the RESTART call to support activities that contribute to reactivate the European agri-food economy after COVID-19 crisis.

This Accelerathon is an open innovation programme of the Finnova Foundation, which seeks the most disruptive ideas or projects in the field of precise agriculture, for which participants are grouped into three main categories: water, green and smart agri-food and biofertilisers, recovery of native seeds or degraded soils. The winning project will be eligible for funding from European funds such as the LIFE programme, Horizon 2020 or Next Generation EU.

The Agritech Accelerathon held the semi-final last January with three finalists; Break-Isolation an idea to improve processes in the sector, La Coolmena the social proposal to protect bees and Algali-TIC focused on offering a new life to seaweed.

Throughout March, the Finnova Foundation will hold the final of the Agritech Startup Europe Accelerathon, rewarding the best idea with a boost in raising European funds.

In addition, two new Accelerathons were also announced and registration has recently opened; the first one focused on forest fire fighting and habitat recovery and the second one, aimed at the digitization of the agriculture sector.

Transfiere is an important European forum for science, technology and innovation, held annually in the Andalusian city of Malaga.

It is an event of great national and international relevance that will be held on Wednesday 16 and Thursday 17 February at the Palacio de Ferias y Congresos de Málaga, bringing together professionals, entrepreneurs, scientists, academics and authorities related to innovation. This forum aims to encourage debate on scientific and technological issues, while promoting synergies, relationships, alliances or ventures that will be necessary for the development of projects and the promotion of Spain as an innovative country.

SmartAgriHubs is a project that belongs to the European Union and is framed in the Horizon 2020 programme, a proposal that brings together more than 164 partners from the agri-food sector in Europe. The project aims to bring about the digitization of agriculture, fostering an agricultural innovation ecosystem dedicated to excellence, sustainability and success.

Accelerathon is a recent programme that was born in 2020 as a solution to the union of the Hackatons in which Finnova participates with the support of the Startup Europe Awards and Startup Europe Accelerator programmes.

After participating in the European hackathon EUvsVirus organized by the European Commission as partners, we realized the value that we could contribute by combining our knowledge of European funding programmes, and the large ecosystem, partners and collaborators in the public and private spheres in which we are involved at the Finnova Foundation.

In this sense, 5 Accelerathons have been held with great success in terms of participation, communication and innovative solutions.

Finnova is a Spanish-Belgian non-profit foundation based in Brussels (Belgium) with a presence in Spain in the Valencian Community, the Basque Country, Andalusia, the Community of Madrid and the Canary Islands. Finnova’s mission is to assist in the creation of innovative initiatives through appropriate funding and support. Finnova facilitates communication and information between different public and private entities with the aim of supporting and promoting EU funding streams in the thematic areas of environment, water, health, public works, energy, tourism, ICT and entrepreneurship.

Finnova’s experience in leading European project communication and dissemination activities is combined with a solid proven track record in start-ups and business support programmes, such as accelerators, incubators and ceremonial event selection and awarding. The Foundation has participated and/or mentored 27 projects with the Seal of Excellence, a quality label awarded to project proposals that have applied for funding from HORIZONTE2020, the EU’s Framework Programme for Research and Innovation.

In 2021 Finnova received the European Enterprise Promotion Award (EEPA) from the European Commission in category 4 of support for the internationalization of companies. In its commitment to innovation, Finnova has been organizing the Startup Europe Awards since 2016, an initiative of the European Commission’s DG Connect, to recognize the best European startups in the social fieldl.