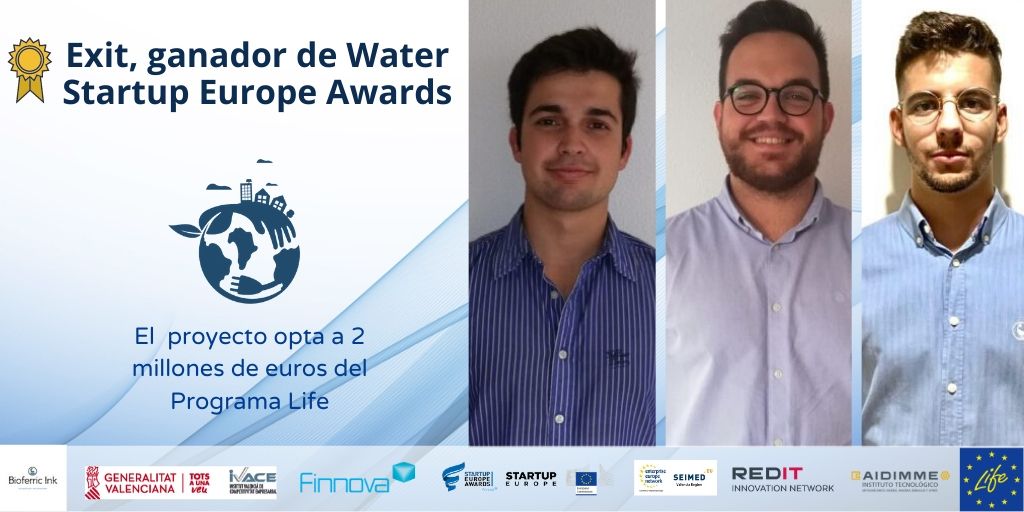 – The Team 2: EXIT – EXtraction mIcroplasTic has been declared the winner of the Water Accelerathon

Brussels, July 1, 2020 – The Team 2: EXIT – EXtraction mIcroplasTic team has become the winner of the first edition of the Water Startup Europe Accelerathon for the wastewater challenge. This open innovation competition has been boosted by IVACE, in collaboration with Seimed, Redit, Aidimme and the ADR forum. Furthermore, the competition has been implemented by Finnova.  “Our technology is based on the use of magnetic particles. The goal is to separate the microplastics and reuse these particles in a new cycle of use” declared Álvaro Mas, CEO of Biofferic and member of the winning team, which will now have the opportunity to present the project to the LIFE programme of the DG ENVIRONMENT of the European Commission and be qualified for a grant of up to €2 million.

On Monday, June 29, the final ceremony of the Accelerathon IVACE Water Startup Europe Awards was held online. The jury, the three finalist teams (EXIT- EXtraction mIcroplasTic, WaterFly and Sustainable wastewater treatment project for municipalities) and a total of 300 spectators took part in it.

Throughout the live streaming ceremony held online and on Facebook Live, each team presented its project during an elevator pitch and undertook a double assessment. On one hand, a jury formed by 15 experts from Mexico, Panama, Spain and Portugal analysed the proposals of each team; their assessment signified the 80 % of the overall scoring. On the other hand, the votes of the audience, more than 3.500 votes, corresponded to the remaining 20 %.

EXIT – EXtraction mIcroplasTic PRESENTS THE MOST INNOVATIVE AND DISRUPTIVE PROJECT

During the last week, the participants of the programme have worked in different multidisciplinary proposals concerning the treatment of wastewater as a source of resources and the recycling of water, energy and raw materials. The teams have been mentored by the Finnova Foundation experts on European funds.

The programme started on May 28, involving a total of 12 teams. After the two semi-finals, only three teams reached the final. Today, Bioferric has been declared winner of the Accelerathon IVACE Water Startup Europe Awards.

“This project aims at demonstrating the viability of magnetic particles for the elimination and reuse of microplastics (MP) present in urban and industrial wastewater. The objective is to avoid its discharge into the environment and to contribute through its subsequent valorisation to the circular economy model promoted by the European Union (COM (2018) 28 final). The proposed technology has already been validated at laboratory scale. It has achieved a removal efficiency greater than 99 % by using real wastewater”, Bioferric declared.

The winning team of the Accelerathon IVACE Water Startup Europe Awards organized by Finnova Foundation will obtain a European accelerator ticket to receive the funding of the LIFE programme 2020 call of the DG ENVIRONMENT of the European Commission, which grants around €2 million per project. Moreover, the winners will take part in the Startup Europe Awards European final as finalists of the category Water.

From June 30 to July 14, the Finnova Foundation experts on European funds will mentor the winning team to write the project plan and be able to submit it to the Environment sub-programme of the LIFE programme call for proposals.

The programme counts on the institutional backup of the DG CONNECT of the European Commission and it is aimed at civil servants and political leaders of municipalities, companies and public corporations, employers’ associations, technological institutes, universities, innovative enterprises holding patents, or corporations proposing environmental challenges which can be fought off from the financial and technological boost offered by the LIFE programme. Additionally, the programme follows the directions of the following SDGs of the United Nations, aiming to support their visibility and objectives: